Prayer to Our Lady of Anarchy 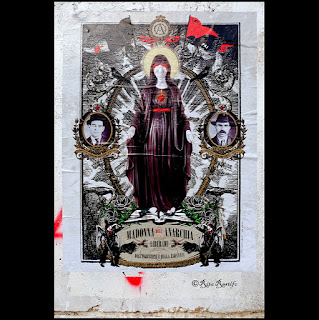 Red-belted, standing on an open book,

With hands outstretched but empty. Hear our cries!

In dread and sorrow for the things you’ve seen

You weep for us. And yet your heart is fire.

Come blazing through us till we cannot sleep.

And help us keep

Our covenant with rage,

Our own bright fire.

And let our eyes bleed with the same desire

Until the day arrives when we shall see

Fulfillment of the prophecy

That someday soon, a flood

Shall cleanse these streets and wash your cheeks of blood.

In Spain before the Civil War, anarchism was known as “the Idea,” and anarchist activists had a reputation for almost monastic austerity and self-discipline. Despite these semi-religious overtones, the far majority of them were atheists and many were militantly hostile to organized religion. Today’s anarchist movement still includes many atheists, but also a large minority of religious people – including pagans. Pagan anarchism is a reality, a fact which would probably surprise many of the past adherents of “the Idea.” So what exactly is pagan anarchism?
Published by Pablo Heraklio en 16:40

I was somewhat surprised by that image of that virgin. Then, seeing that she was Italian, my surprise is gone. It is almost impossible that such an image could be of an Iberian anarchist origin. Here we would have portrayed her with a haughty gaze, a blue jumpsuit and a rifle on her shoulder. That's for sure!

Yes very unlikely. As unusual as the girl in the picture is virgin. Let`s saids she is just laday.
In many places they live anarchy in different ways. The most of us are atheist, but for those belivers here is it icon. Could be an unbeliver madonna? The symbol is important.
Health brother!