Source- The community of Suc-Tuc form a self-government against corruption and repression in Campeche – Ruptura Colectiva (RC) - 14.1.2017

Demián Revart
“Impossible takes just a little bit longer”
-Someone said it. Today it is replicated in the walls (from the street and from Facebook)-

Towards a panorama where we put the reflectors 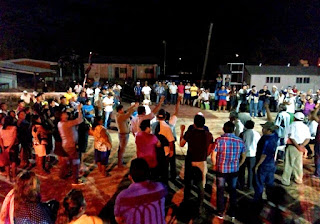 The current capitalistic order dictates the images of the world -and information- at their convenience. The alternatives that many seek before the global deterioration and that media dictatorship that prevents more people from knowing them is also centralized in vanguards, in historical resistance, leaving in the background other proposals that emerge, even more solid than those.
The work routine – and the study – is not referred to the exploitation of our time, energy and opportunities to perform other activities that do not fall into the monotony, in the “I wish I were not here”, it also subtracts scene to our understand-the-space, to see other geographies, to the possibility of intertwining subject to subject, cause to cause. It is not impossible to leave our spheres.
While the main topics are still the #NoAlGasolinazo, Trump’s presidency, Obama’s hypocrisy in his last speech, etc., a Mayan community far from the metropolis has become a new banner of that speech that is repeated over and over to the point of fatigue – and as that New Year’s resolution – is seldom put into practice: it is time to get organized!
In the municipality of Hopelchén in Campeche, the community of San Francisco Suc-Tuc has decided to be governed by usages and customs. What does this mean? On January 9, 10 and 11, after a day of historic deliberative assemblies, the people elected an autonomous Council of Government and three representatives who will serve as treasurer, secretary and sheriff, all of them decentralized and revocable for the administration that arises in future assemblies, a radical difference from what was set in the old constitutional order.
Now, they will see to the autonomous management of the territory and the social life in pursuit of the common interests, and no longer for what the local government has always transformed into business and profit of a few.

From the silenced humiliation to “the solution is in our voice”

Suc-Tuc is a relatively small communal territory that is crossed by the Campeche-Holpechén-Bolonchén highway, modernized in the middle of 2015. Its main source of income is consolidated in apiculture and agriculture, mainly in the production of creole corn. As for the population, the majority is of Mayan descent and 80% still speak the native language, there are other groups such as some Guatemalan families that have joined the locality (representing 2% of the population at the most). Official figures estimate an approximate 1179 inhabitants, although they say that “we are only 653 registered.”

That early climate of violence, lies and rage awakened even more the participation of the Suc-Tuc assembly. Roadblocks are hardened. The rallies outside the State Congress radicalize their tone. Under the slogan “we are not gang members, we are an indigenous community that demands justice” and “the government represses the people of Suc-Ttuc,” more people attended the protests with the spirit of collaborating for the release of the 3 prisoners. Sergio, Diego and José Alfredo are currently in custody in the San Francisco Kobén Prison.
At the dialogue tables after 17 December, the authorities focused – magically! – on the replacement of the commissioner, very little was spoken of the three prisoners. Some of the arguments that the legal authorities use as rhetoric are that “there is no conclusive evidence, which is why they were not transferred to the penitentiary; they are given 3 months of preventive jail remand (…) by the 31st, of March! – will be back in their homes”.
In addition, the population learns that Ucán Chan is still sealing and validating documents from her home. Therefore, the message that the state will continue to ignore the petitions of the movement became rather a message of humiliation that found his last second of life. The community closes the curtain saying: “we are not going to continue going to the City to demonstrate, we will organize locally to choose our representatives and change course.”

It is worth not being pernicious, so it is very important to state that it would be too optimistic to give de facto the establishment of self-government, at least not at the moment, a concrete definition of what happens in Suc-Tuc is, as the title of this text, the majority decision of the community to conform and be governed by a communal self-government. The results and experiences will be the determining factors so that in the not so distant future it will be written everywhere that “Suc-Tuc is an autonomous community”.
Thus, we can sketch how the community process was conceived:
The call to elect its authorities by usages and customs was spread by voice to be held on January 9. However, the assembly was dissolved by the provocation of an agent infiltrated the PRI, diverting the objectives that people already had well thought, causing in turn the assembly to be postponed for the next day.
On January 10 at night, Suc-Tuc elected the members of an autonomous Governing Council and three representatives who will serve as treasurer, secretary and a new commissioner, respectively. Almost at the end of this historic moment, Javier Soberanis made an appearance, with complete exasperation, intimidating and trying to revert the agreements reached.
The human rights defenders who make up the organization Caracol ODDH -partners and translators also in other instances of dialogue with the different levels of government-, spread in their social networks that “(…) even though every moment the secretary of the City Council tried to tell the villagers that it was not right to elect by usages and customs, “because in Campeche there is no community that governs this way” and to wait the times and electoral processes of the municipality, the villagers chose their Representatives and signed a memorandum of understanding, thus recognizing the new popular administration.” As a legal weapon – which left Soberanis with no arguments – they gave reading to the  Articles 2 and 39 constitutional, current guidelines for popular election at any time.
The vote was an act of direct democracy based on the trustworthiness and mutual support shown by both settlers and elected representatives. It is a new scheme without the direct / indirect participation of the political parties6 and that rests in a total horizontality.
On the morning of January 11, the people took the minutes of the new Governing Council to the head of Hopelchén. The meeting was not pleasant. In an interview with Tribuna Campeche, the villagers denounce that the City Council refused to remove the commissioner, textually, saying that “the most viable thing is that she renounces and makes things easier for the people.7” What hope can we have that a person with so much power and a way of life resolved at the expense of the productive work of others renounce such overnight comforts? They were blamed with other words, arguing that “you have to wait until 2018 because you chose the commissioner … it is okay to organize, but your representative can only be civil, not commissary.”
If we analyze these statements we can say that … it is irrefutable ! the State seeks all the pieces of distraction-discursive confrontation to ‘gain time’ and prevent Suc-Tuc’s self-government from being consolidated and start to operate. Similarly, Caracol ODHH reports that “Soberanis did not want to receive the minutes because it was not “sealed” with the ex-commissioner’s seal, despite the fact that the act consists of signatures of the majority of the registered inhabitants of the community,” an excuse difficult to overcome under the scheme of legality, since the commissioner has not come to the public since the conflict that broke out in early December.

To build a communal self-government does not symbolize a temporary exit, it is a germ that works day by day, it is a political-organizational task that entails too much effort and vulnerability for those who integrate and support it. The State is hostile and will seek all ways to counteract the strength of the people of Suc Tuc, for example, the withdrawal of social programs, the scholarships -ironically, the spearhead of this movement-, police intimidation8 and even extreme decisions of violent repression as was observed in the early hours of December 17.
Solidarity must be urgent and DEFINING by Mexico and the world, both for the release of the prisoners and for avoiding the dismantling of the process.
That is why we say: texts should not hesitate only in information, give them a practical sense. Let’s replicate what happens in Suc-Tuc by voice, in the streets, on the internet, in all existing corners. Let’s be alert, light and place the reflectors – of which I wrote at the beginning of the article – where they are needed!
DEFINITIVE AND INTERNATIONAL SOLIDARITY WITH THE COMMUNITY OF SUC-TUC!
IMMEDIATE AND UNCONDITIONAL FREEDOM TO SERGIO, DIEGO AND JOSÉ ALFREDO, PRISONERS FOR FIGHTING FOR TRUTH AND SELF-DETERMINATION!
AUTONOMY IS LIFE, SUBJUGATION IS DEATH!