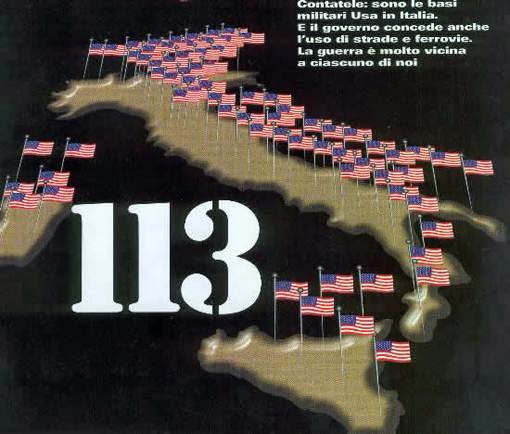 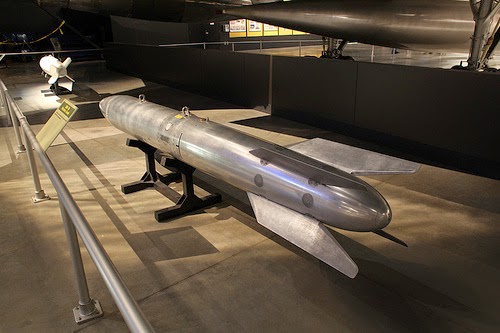 Anarchism poses a totally different point of view about the world. Changing values ​​and changing consciousness. We are the personification of the "Collective Mind", the swarm without leader Mastermind that self-organizing. Mind gets shape, the group gets strength, the "Single Thought", which is nothing but pure fascism.

The writings are the basis , the foundation, show our intelligence. They are the small idea that echoes in the mind before the contradictions that surround it, and move the body, giving act to the will.

Our ancestors saw it clear, they organized thousands of newspapers in full clandestinity. We can not be less: fanzines, blogs, websites, videos, radios, post, novels, movies, news, review, poetry, art , crafts, pets, plays ... whatever you like. Propaganda is a bridge for human cattle to acces the Conscious Collective. Write and contribute!

I want to hear you , we need to hear us!


An anarchist group : living the Anarchy, the only viable political system 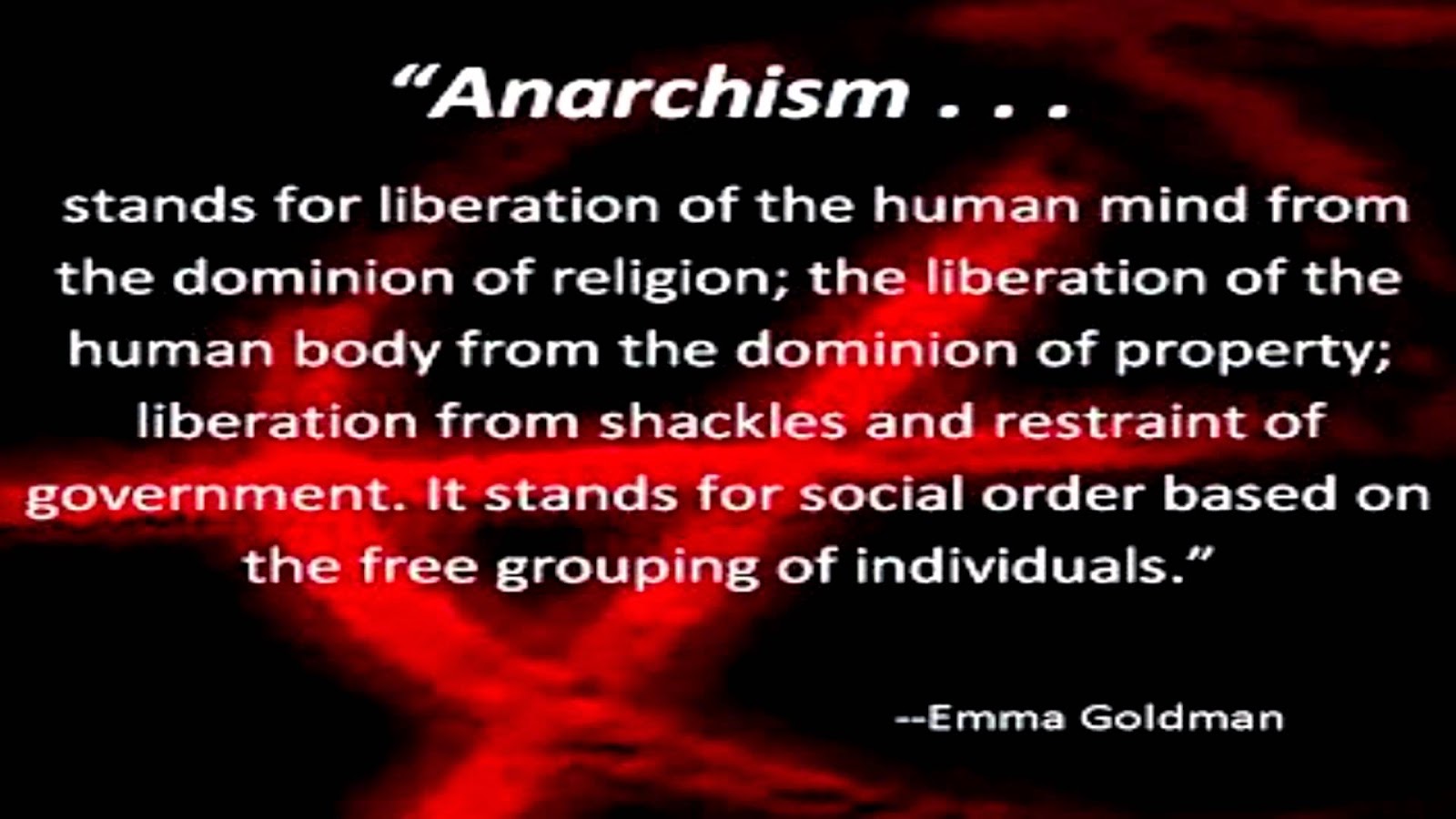 There is only one way to be an anarchist: practice.
It is in the group where personal sovereignty is exercised. It is the daily conflict resolution that makes the difference with rest of political systems.
We have a responsibility to exercise our anarchism and the privilege of live the anarchy.

Masters want us isolated, competitive, predators like them. Isolated we have not strength, we are vulnerable. We are treat as the prey, like cattle by the time they raze the planet. The group is another bridge that transforms the individual. We learn by walking the path. We must take time to organize and live in group.

We are a movement with massive vocation where our ultimate goal is that billions of people voluntarily self-manage, self-supportive, autonomous that have no middlemen.
To make people believe we must demostrate:
-that we can self-organize,
-that is possible to act act out of the ubiquitous capitalist system
-that we can overcome it tripping and traps.

Here there are no heroes or saviors.
We do not spare anyone, all we are more tham valuable for the anarchy, just missing you!
Source: LA TARCOTECA Contrainfo: Pensamiento: un anarquista un grupo, un anarquista un blog
Published by Pablo Heraklio en 13:05 No hay comentarios: 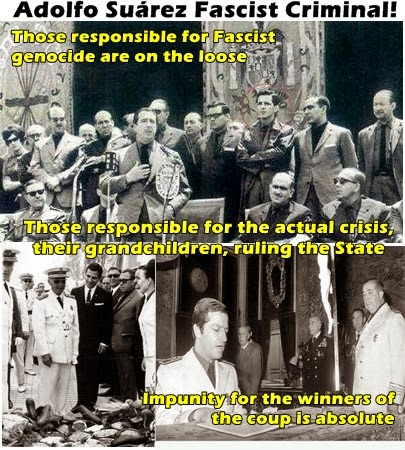 Adolfo Suarez was one of the many Fascist Regime Criminals responsible of execute the regime change in the 70s, in the way that Lords, the Privileged, the Political Caste, the known Caciques we all know who they are, would be able retain the accumulated power of the previus period. For that task was requiered to maintain the structures and cover both the atrocities, the being committed by the State Terrorism in those same moments as the systematic genocide perpetrated in Spain for 40 years under the dictatorship boot. Whether at home or abroad. With the mass media work at full capacity in that way color television arrived , and mass amnesia was complete. Nobody remembers the Half Million dead or where their ditches were.

To the 70s United States clearly supported [EN]the military dictatorship model, the new monarchy, as the most appropriate for their hegemonic goals in the midst of the Cold War. The people of Spain, Portugal, Greece, Argentina, Chile, Brazil, Pakistan, Iran and many more suffered from the greedy match. At the end of this period USA gave the strategic order to his vassals [EN] to represent a regime change, facelift, from dictatorships to Authoritarian Democracies. The hard work of the political Caste these years was run the commands of the americans while maintaining its Power intact.

In Spain the response was immediate: Change everything to nothing changes. Elimination of political resistance represented by the assesination of Dictatorship Head of State Carrero Blanco and the killing of the social base, unions, nationalist. The political articulation instrumentalized by the Moncloa Pacts. The moral and social justification as by a Constitution. Resetting memory through repression and the "Final End Law" [Ley de Punto Final 1977]. "All Bound and well tied".
____________
Suárez: biography of an Spanish Criminal Fascist.
Source Diario De Vurgos (Burgos) » Adolfo Suárez, el olvido de un genocidio

The March 23 died Adolfo Suarez, first democratic Primer Minister of Spain, FRANQUIST RECYCLED IN DEMOCRATIC! like so many others in the young "democracy."

Educated in the fascist Grl Franco environment, the fascist Movement, linked his studies at the Complutense University of Madrid, and with great influence of Opus Dei sect, occuped important positions in the Congress and finally as General Secretary Deputy of the Fascist Government, fruitful economic agreements for the expansion of neoliberalism in the country, was the moment in the spanish history known as the "Franco Openness".

At the same time, the regime knew cornered before a new European and international political horizon, a huge economic crisis and social unrest. After 40 years of dictatorship that left more than Half Million killed and about 400,000 people in exile, allowing complete impunity, in order to strengthen the country was necessary to forget and heal the wounds of the past, irreconcilable wounds for those murderers of the people, that went from held political and government positions in franquist regimen to invent and command political parties, calling themselves democratics, and to continue in possession of Power. A TRAPSITION [instead of the officialy called Transition] perpetrated after a thorough millimetric steps study to dismantling the old dictatorship and the renovation of the new Spanish State. Father of democracy or master of oblivion? Hero or villain? Let's see.

Carrero Blanco successor of the General dies in an outrage bomb plot and was replaced by Arias Navarro, who was unable to stop the socio-economic crisis of the Fascist Regime. It is at that point when King Juan Carlos decides to appoint, after numerous meetings and agreements, Suarez as the perfect new Prime Minister, following a tumultuous period in which social tension explores as huge demonstrations, strikes, clashes and armed groups activities.

Suarez, founder of the UCD, decides to undertake the challenge entrusted by King, educated by the same Franco, who said that loudly and clearly sentence "I left all bound and well tied". Suarez headed and puts the bricks to continue the Transition: legalized the Communist Party, leaving aside the rest of the social partners and imprisoned that continued on a war. Through the Moncloa Pacts, signed by some of the political parties and trade unions along with Popular Alliance Party, group of the also murderer Manuel Fraga who died this past year, developing a sketch of Constitution that denied the dignity of the killed victims defending freedom, and set impunity and injustice as standard. Changing everything to nothing changes!
---------------------
113 DEAD ANOTHER ERA SUÁREZ Gara
Adolfo Suárez took control of the Spanish Government on July 3, 1976, four months after the slaughter of Gasteiz. The next five years were the most violent in recent times: during his governments 262 was killed by ETA and 113 executed in attacks of the Goverment fascist side, this ones practically counted unpunished.
---------------------
This so highly decorated figure these days as "the one who summoned the first democratic elections in the Spanish state", all a challenge for we idiots to choose who we want to explode us, green (ecologist), blue (right), red (left) or whatever color, denying other possibilities or other experiences of autonomy and freedom that were underway in the State, in order to strengthen the faith in the Nation as a guarantor of rights and obligations. A "patriot" who put the interest of the State above of the interest of people.

More tham obvious are the signs of sympathy and suffering in the mass media, political institutions and financial elites, and a generation of Lords that through the three groups mentioned, have made ​​this  villain seems like a hero in the public opinion, the puppet that Power used at that times.

Extol this puppet of  Americans that as many others do not hesitate to affirm: was the commissioned pawn to execute the transition, the [show as neutral] puppet  that the Power needs to ensure reach the objectives. In fact many did not doubt to ensure in their statements that would have to invent more politicians like him. After seen what had happened this last weekend in Madrid in the Masive and Popular Demostration Marches of Dignity 22M [EN]. It is clear that democracy has to make distinction between good ad bad politicians with which mass media can give us moral lessons of the Transition and the good values ​​of our democracy and their Fathers.

At times less people believes this lies. The new generations are in rage and disgruntled whith those who Govern us as we were their goods. It is in play the own freedom, not to choose who to exploits us, but to live without exploitation.

One of their heroes that keep the little national pride that sustains democracy has fall. Juan Carlos and political parties are alone with the task of use the death of Suarez as an example to calm the social war opened in the heart of the society for quite some time.