The largest demonstration was held in Barcelona, but the protest was conducted simultaneously in ten cities of the Spanish State. Greater police presence harasses the concentration convened in Madrid.
PHOTO GALLERY
@FOTOMOVIMIENTO 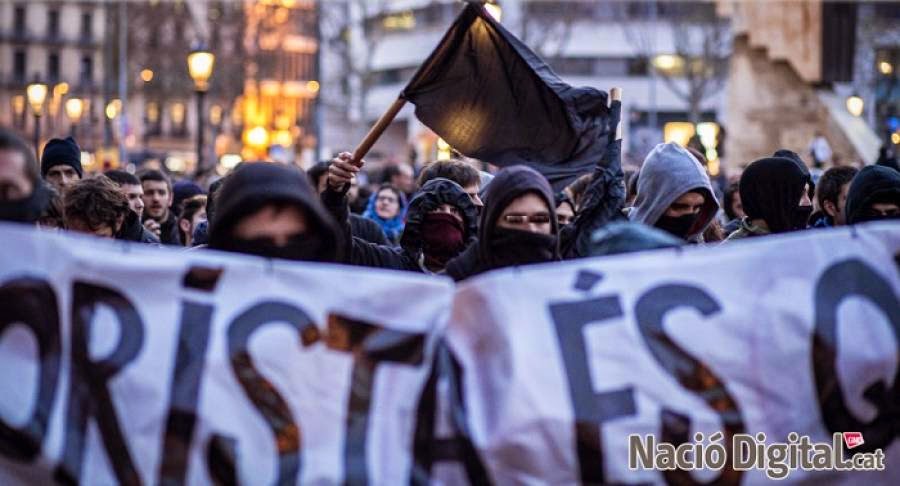 The more crowded march was the Barcelona one, but protest day was done simultaneously in a dozen cities in Spain.
Between 1,500 and 2,000 people attended the Saturday afternoon demonstration in Barcelona in a call from the Seven Imprisoned Support Assembly following the Pandora Operation. The march has started six quarters from Plaza Catalonia, followed closely by a dozen vans of Mobile Brigade (Brimo, antiriot hitmen). The police deployment, however, was minimal, as most of the Catalans Riot command are in holidays. The operational leader was a sergeants and not a sub-inspectors as usual, and was set only by two of eight Units based Sabadell. They was support by the ARRO unit ,  Barcelona pro-riots unit, who had been entrusted with the protection of Portal de l'Angel shopping center (own by "el Corte Inglés" fascist trust), the Justice Department and the CDC headquarters in Corsica Street.

Simultaneously held up to a dozen protests throughout Spain. In the center of Madrid a hundred protesters, 200 in Zaragoza and dozens Castellón, are some of the highest concentrations. Solidarity but also has internationalized and has shown today before the Spanish consulate in the capital of Slovenia and displayed in Lisbon tomorrow.

"Terrorist is who condemns us to a life of misery, not who rebelled against it," was the slogan that opened the event in Barcelona. Also shouting "The only terrorist is the Capitalist State" with the crowd went in and out of "El Corte Inglés" fascist shopping center and the ice rink that these days occupies the Catalonia Square. The journey of a mile walk along the Paseo de Gracia flow normally  with the fascist policemen vans at a distance. "Terrorism is not reached at the end of the month", "If touch one you touch us all" and "Ito ito, ito, the small bird to fall" in reference to the police helicopter hovering in progress at all the time and has inpirated some slogans more. The March reached Gran de Gracia. At this point where some protesters have broken with hammers crystals of banks, shops and a large hotel chains.

Banco Sabadell, La Caixa, Banco Santander, BBVA and Caixa Catalonia bank just ended with broken glass and some others multinational franchises apparel and a shop of gold and silver sales. The large windows of the "Hotel Casa Fuster" have been very damaged. It so happens that this building was the consulate of Nazi Germany in Barcelona in 1936, shortly before becoming the spring of 1937, the headquarters of the defense committee of the revolution driven by the CNT, FAI, the Libertarian Youth and the Iberian Communist Youth. Phalange took the building again in 1939. After the "Transition" period was the scene of a renewed dispute between the council and the local movement. The claim that there was both a social facility mitigated by the Catalan Socialist Party PSC, which chose to give the estate to Noga holding (based in Granada) license luxury hotel.

The sound of broken glass preceded a warning of "imminent charge" that the Mossos d'Esquadra issued by the speakers.

The sound of broken glass preceded a warning of "imminent load" that the Mossos d'Esquadra issued by the police van speakers. However, the MArch has reached Diamond Square and there has been called off, without oportunity to antiriot charge the bulk of the protest. Have been, however, some sliding between demonstrators and plainclothes agents. In one of these actions, Goya Street, a boy has been retained, has been identified and released.

To remember that Pandora operation, driven by the Mossos d'Esquadra Autonomic Catalan Police, unfolded the morning of December 16, fourteen searches of buildings ("Kasa de la  Mountanya", Libertarian Ateneo d'el Palomar, Poble Sec Anarchist Ateneo and eleven homes), eleven people arrested, seven of them imprisoned. Atorneis explained that some of them are dispersed and isolated under FIES penitentiary regime; they spend twenty hours a day completely isolated. Casta Judge Javier Gómez Bermúdez signed orders for admission to prison and, at the request of the Mossos d'Esquadra, agreed to the extend the secret summary of the investigation that began two years ago with multiple telephone interventions and monitoring.

As learned the direct drive of the Mossos d'Esquadra specializes in tracking the anarchist movement is still in force operating against the anarchist groups Coordinated (GAC), that supposedly would be the target of what the cabinet's press department Interior called "anarchist terrorism operation." Despite not being able to know the details of the case, through which the order was sent to prison seven anarchists learned that two of the signs would inculpatoris reading and distribution of the book "Against Democracy" and the use of the service encrypted e-mail server that offers Rise Up.

The Spanish democracy not stops giving lessons. This morning of December 27 has been in Opera Square in Madrid, during concentration on solidarity with detainees by the under the eye judge Bermúdez before his so evident "anarchist terrorism".

Democracy that Goberment Delegate Cristina Cifuentes, and her well trained blue puppies understood as repression to anyone who disagrees with the postdictatioral regime. Massive identifications and an arrest, besides shoving and utter contempt for freedom. Meanwhile hundreds of pedestrians and citizens, those who will vote in their elections setting a good example in the "festival of democracy", spent long with purchases under his arm.

A concentration that almost has not even reached sixty minutes, with just one hundred attendees, but blue puppies well trained in rows with batons in their hands and helmets on belts, we assume that ready to democratize all the rebels that shout against this cruel, violent and chaotic system.

We have been filled with rage, because their violence is legitimized by law while our resistance causes the most horrible tortures. We have gone with the tension of having the most absolute trampling of human rights. But at the end of the day, we went with the joy of being accomplices of injustice.

Today in Opera, some deliver democracy, and the other fortitude, courage and solidarity.

Now, you should choose which side you're on.