Call out – International Week of Solidarity to Anarchist Prisoners, August 23-30 – 2017

This year, the International solidarity week for anarchist prisoners will be spent for the fifth time in 23rd to 30th August and we come stronger than ever!

Some political prisoners are already supported, but far from all of them. Also, the supported are usually involved in authoritarian politics and not grassroots activities. Anarchist prisoners are not often well-known people, even though they might be long term activists. Their ways to fight back oppressors and wrongdoings are not necessary following the current laws of their location, which is judged by some authoritarian organisations. The vast amount and diversity of cases of anarchist prisoners is surprising to many.

We wanted to choose a week, so that it would be easy as possible to organise different kinds of expressions of solidarity, which would be supported by one another. The beginning of the week was chosen to be the execution date of Sacco and Vanzetti, two Italian-American anarchists, in 1927. They were convicted with very little amount of evidence, and many still consider that they were punished from their anarchist views.

Welcome to join!
Solidarity can express itself in many forms.

Please report us your done actions to the address tillallarefree@riseup.net. You can also announce your event in advance in the same address, we list them on our page http://solidarity.international/. From the pages you can also find examples and tips of actions and support mail to anarchists, links to prisoner lists and more.

This entry was posted on Friday, July 21st, 2017 at 3:57 pm and is filed under Prison Struggle
Published by Pablo Heraklio en 9:11 No hay comentarios:


America is not sending its best people to Germany. A number of Far Right pseudo-journalists attempted to attend the G20 counter-protests in Hamburg, but were exposed by antifa journalist Soeren Kohlhuber. These were Lauren Southern (Canada), Luke Rudkowski and Tim Pool (U.S.), and Max Bachmann (Germany). They were later confronted by activists who were displeased by their presence. Kohlhuber received a slew of death threats in return. He’s in Hamburg right now covering the “Welcome to Hell” demonstrations, but he made time to do a short interview with NYC Antifa. 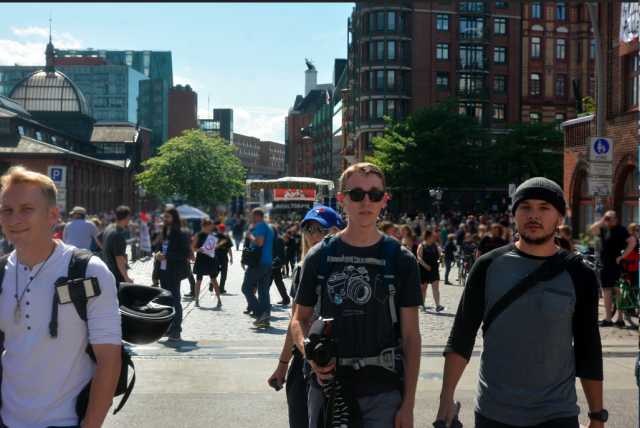 In Hamburg, Left to Right: Luke Rudkowsky, Lauren Southern, Max Bachmann, Tim Pool (Photo: Sören Kohlhuber)
The Far Right “journalists” were:
Lauren Southern, an Alt Right media figure who is working with European white nationalist Identitarian groups to block refugee boats. She had the chutzpah to wear a “Identity Europa” shirt to the demonstrations, which were so intense that the crowds overwhelmed 15,000 police.
Luke Rudkowski runs the 9/11 Truth “We Are Change” group. He frequently promotes militia leaders and antisemites like his hero David Icke. He even blamed the Denver Anarchist Black Cross for the 2012 Aurora, Colorado theater mass shooting.
Rudkowski and Southern both came to the June 10 counter-protest against the Islamophobic rally at Foley Square in downtown New York. Together, they attempted to come into the counter-protest and videotape people, but were quickly pushed out. Southern claimed she had fox urine thrown on her, and Rudkowski immediately went to the police to try and get people arrested.
Rudkowski claimed he was there as a “neutral” party but it is clear he is acting to facilitate the views of Far Right activists who are less cagey about their real views, like Southern.
Tim Pool, like Rudkowski, made his reputation as a livestreamer at Occupy Wall Street’s Zucotti Square. There the snitch attempted to livestream activists engaged what could be perceived as illegal actions. More recently he has drank the Alt Right kool-aid, too, and is now promoting their movement while also pretending to be “neutral.”
The three were also joined by a German man, Max Bachmann, who runs in right-wing conspiracy theory circles.
1) How did you find out that Lauren Southern, Tim Pool, and Luke Rudkowski were coming to the G20 protests in Hamburg? Did you see them there first, or did you have advance notice?
I walked to the rally and saw a girl with a shirt of the Far Right group “Identity Europa.” I didn’t know who she was.

Lauren Southern sporting a “Identity Europa” t-shirt at the G20 demo. (Photo: Sören Kohlhuber)
2) After you saw this, how did you publicize it?
I warned people on Twitter, because in Germany “Identitäre” [Identitarians] and other Far Right groups take photos from antifascists and journalists for their files.
3) What happened to the them?
I heard that people attacked them—but I only heard this from Luke Rudkowski’s Youtube channel.
4) What happened to you afterward?
Luke made a Youtube video with my Twitter account and photo. After this I got a shitstorm from the Far Right, Reuters, and others. Now they are harassing me on different kinds of platforms.
For more, see Soeren Kohlhuber’s longer article on what happened (in German): “Rechte Medienaktivisten bei G20 – anschließende Kampagne gegen mich,” https://soerenkohlhuber.wordpress.com/2017/07/08/rechte-medienaktivisten-bei-g20-anschliessende-kampagne-gegen-mich.
Kohlhuber’s social media and webpage:
www.twitter.com/SoerenKohlhuber
www.facebook.com/soeren.kohlhuber
https://soerenkohlhuber.wordpress.com
Published by Pablo Heraklio en 2:44 1 comentario: