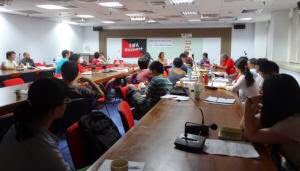 During the first weeks of August, Asia, took place in a series of presentations and discussions on unionism. Many sections of the AIT showed their topics and took part in meetings and roundtable discussions with a wide range of activists from Hong Kong and Taipei.

In addition a presentation and discussion on the principles and practice of anarcho-syndicalism and a presentation on IWA, its history and its organization. Seven IWA Sections participated, presenting briefs about themselves and how they are organized. There were many examples of successful direct action, accompanied with videos. There were explanations on how some organizations choose to conduct a campaign and also some examples of social protests or activities that have been committed Sections, from mass protests in Brazil to cooperatives in Spain or the tenant movement in Poland.

The event generated lots of discussion and exchange. Also get to learn about the local realities of Hong Kong and Taiwan, setting Extra meetings with activists. A separate meeting on anti-gentrificatión movements which took part some of the Hong Kong activists was held, sharing their experiences.

Colleagues who participated in the organization and events evaluate them positively, wishing to continue the dialogue, and produce some more basic texts aimed at the people of that region.

We thank all those who helped organize the events in these cities, to everyone who helped with the spaces, translation, food or simply showed their hospitality. Also Thanks to those who attended the meetings, organized extra events and shared their local experiences! We hope to see you again and to hear from you soon. 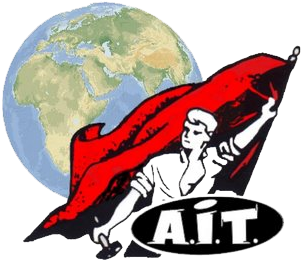 News of great importance in order to create a truly global internationalism able to coordinate effective actions against the Masters and Powes. Courage, comrades, we expect your sections!

Also made important, if belated, as it is in this area of the world where industries and machines are placed, and in order to move to Africa, the latter market are located now.

From tarcoteca all the support and encouragement to colleagues. This road is not easy, but it is the correct. There are no shortcuts to emancipation, only work to ourselves and living the anarchy day by day.
Published by Pablo Heraklio en 3:22 No hay comentarios:

Nazi squat ‘Ramiro Ledesma’ in Madrid burned and painted with slogan-threat. Fire was set at the door of the fascist social centre and a slogan written “Get out of our neighborhoods” on the facade. The industrial building was ‘squatted’ early last week by a group of Nazi-Fascist “Republican Social Movement” (MSR), in the district of Tetuan, Madrid, named ‘Ramiro Ledesma’, and it suffered an assault in the early hours of yesterday.
El Hogar Social Ramiro Ledesma de Tetuán, amanece incendiado y con pintadas
http://madrid.lahaine.org/el-hogar-social-ramiro-ledesma

Popular Call to antifascist action
Anti-fascist demonstration in Tetouan district against the occupation of a building by the neo-Nazi party ideology MSR.

To remember that there was another social center occupied by fascist in Barcelana that had to be left due to the pressure of the nieghbourgs in june. Casal Tramuntana fuck you off! 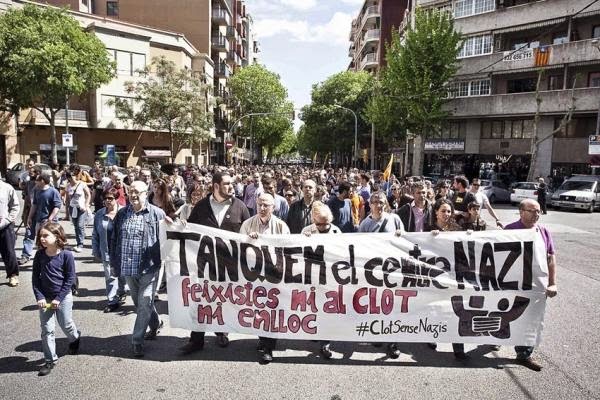 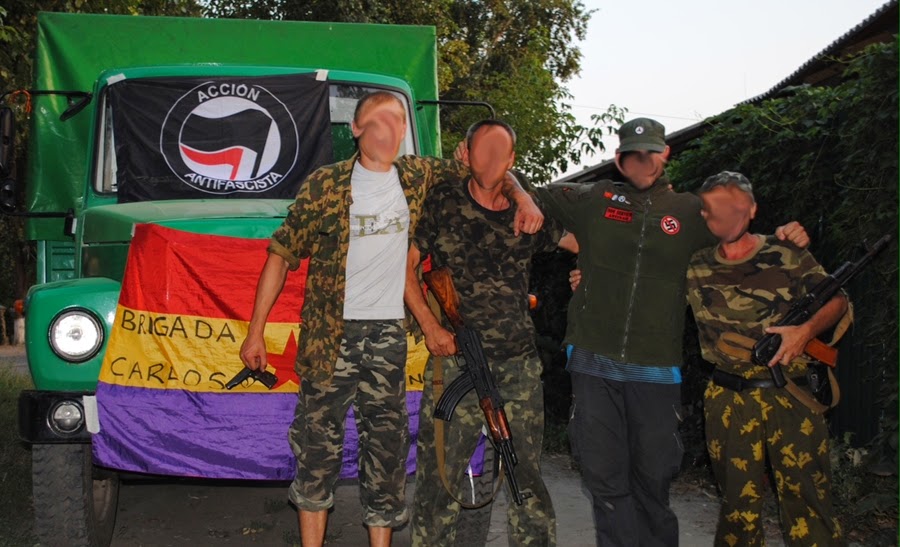 From- Comunicado de la Brigada Internacional Carlos Palomino by Tarcoteca contrainfo
To all the anti-fascist of the world.

To the working class, the exploited and dispossessed everywhere.

To all the proud fighters of rebel dignity.

To the good-hearted people.

To the unaffordable to discouragement.

Are months that we watch the inhabitants of the Donbass, eastern Ukraine, suffer. Neo-Nazis have taken the power; fed, trained, organized and led by the USA, by the governments of Europe and NATO in their darkest interests. Meanwhile Obama smiles like a clown, and Europe shows the neo-Nazis in Kiev as a "honorable indignates". Torture, rape, killings and bombings, hover over all who are an obstacle to their plans. Anti-fascists, communists, anarchists and russian speakers in Ukraine are being savagely murdered.

The official media of the world, partners in crime, hide, lie, distort and manipulate to not let all of us know what the "democracies" of the West are doing.

They say that separatist are terrorists, but do not show the images of children dismembered by indiscriminate bombing of civilians by the hands of such "democrats" of Kiev advised by American military experts.

Ukraine suffers the cancer of fascism spreading all around, with all that implies. People who still has a good heart is rised up in arms, forming the Self Defense People's Militia, integrated by the whole working class ... men and women who do not want to reveal their homes destroyed or their sons death.The Popular Workers Donetsk and Lugansk Republics, the Novorrosia Federation, has been proclaimed, and its intent is clear, they will not give up against the fascists, and only leave Donbass feet ahead.

Well, we, the anti-fascist of the Spanish State, we've seen powerless our comrades burned alive in Odessa, we have observed crying with rage how babies perished under shrapnel bombs, we've seen again waving the swastika flag destroying everything in its path ... Enough! We decided that WE WILL NOT BE JUST WATCHING.

We are honored to announce that the International Brigades HAVE COME BACK.
Nearly 80 years ago, when all the world left us alone against Franco, Hitler and Mussolini, more than 50,000 workers from over 54 different nations left everything to come to fight and die in our land, for our freedom, for our future and ... and is time it is time History put us to the height. Seven brigades were formed in Spain in 36 ... here are the first steps to the Eighth in a new century, with the same essence of social struggle.

We call of of you who has feel the blood boil with rage demanding justice in the depths of your hearts, you rise there where you are and came with us to fight alongside the indomitable Donbass. Come fight with us! Let's shout in the face of imperialism that our fellows ARE NOT ALONE!!! They need us! need fighters, need health carers, need drivers, money, supplies ...

Across Europe, far-right resurgence fueled as always by imperialism and soon will knock on the door of your house. We can not wait for the concentration camps finished built.

It is time to shout to the world that we are not tired, not even yield, that we will fight and we will not let them crush us... because we have a new world in our hearts, and that world is growing this same instant.

It my be that we do not get back to see our families, our friends ... but if we do not stop them now, there will be no future for anyone.


Brothers proletarians is now or never!

And to conclude this message, we want to send a message to all fascist, neo-Nazi and imperialist of the world: 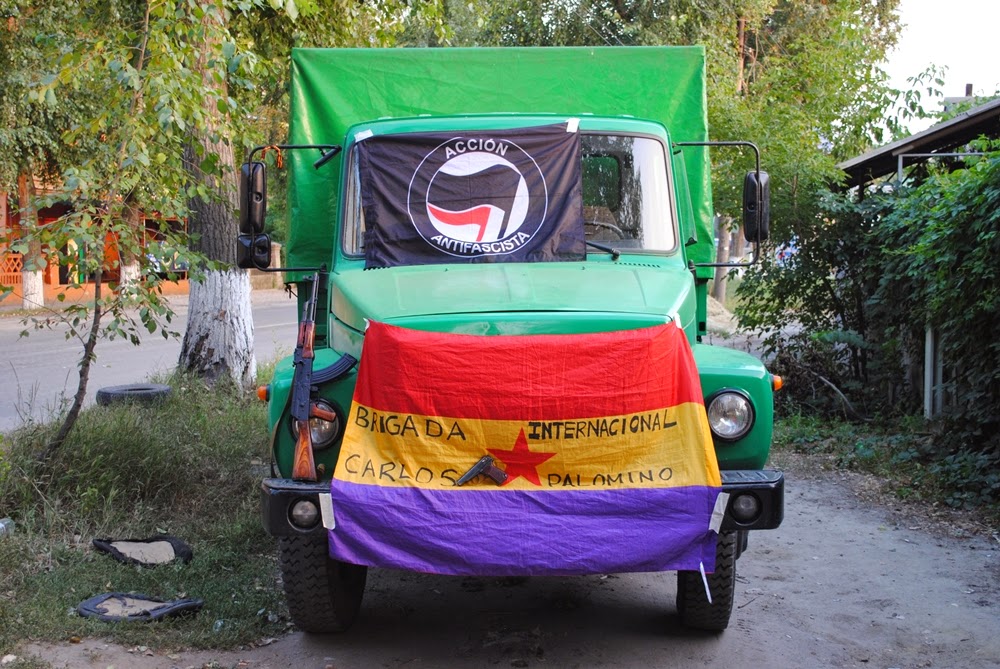 Prepare. You have your days numbered. Wherever you dare to re-extend your empires of misery, terror and greed, wherever you to try to keep repress the peoples, wherever you show your head, you are going to meet us face to face, armed and determined.

Such villains who bombard children and olds... do not deserve life!
Wherever injustice, fear and pain, that are your features, try to emerge from its sewers, you will crush against the iron wall of the antifascist struggle.

We will cross oceans, will cross continents, will sail the skies to go to the barricades hand gun to take our place.

Because you fascist may have the power, money, and strength of arms... but are worthless against the force of reason, against the love of solidarity and against our revolutionary hate. You will be swept away. We have absolutely no fear.

What must be understand is that fascists have one only end ... total destruction.

From now you will find "Stalingrads" in all cities.


DONBASS BE THE TOMB OF FASCISM!
TODAY AS YESTERDAY ... NO PASARÁN !!
See you at the barricades!

* You have complete freedom to translate this statement into all the languages you want.
brigadacarlospalomino@gmail.com
Published by Pablo Heraklio en 4:30 2 comentarios: