Do not miss this article, brief radiography of the popular uprising against the impositions of governments, corporations and banks in South America. And above all the author's conclusions.

The author was forgot mention the Mapuche people's struggle against the Canadian corporation Meridian Gold. We not. 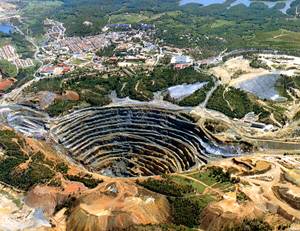 Note the importance of water as the backbone of the coordination city-countryside. In Western Europe, due to the virtual disappearance of the rural world, this is non-existent context. We can see how corporations do not find any opposition, so abundant commodities, from the countryside as water, becomes privatized and reach prices as if were electricity.

And yet the importance of small groups in building the mass movement. Making public causes and potentially harmful effects for the hole community, their speeches are eventually assimilated into the people until they are set in the common speech definitely. They are an example of how reason and truth guide the wills against the interest and the mechanisms of alienation. Sometimes it used to preach in the desert.


The awakening of consciousness begins with the end of the corporations.tctca

Resistance to extractivism is sweeping the Latin American, from north to south, from the Atlantic to the Pacific, involving all countries, forcing governments to pull their soldiers to the streets and declare a state of emergency to terrorize populations that refuse it, because they are suffering the consequences of the model.

Open pit Megamining, big works such as hydroelectric dams, monoculture sprayed with glyphosate and real estate speculation, are being answered as never before in intensity, extent and duration. The Peoples are getting in recent years major victories: brakes on Monsanto seed plant in Malvinas Argentinas; binational project of Barrick Gold's Pascua Lama stop; delaying the construction of dozens of dams, as happened with La Parota dam in Mexico.

The Fights for Southamerica
In recent weeks has been the people of Arequipa, southern Peru, which is forcing the Ollanta Humala government to declare a new state of emergency, after the fourth clash with police repression, in the contest of an mobilization that last already more than 60 days, against the Tia Maria copper mine project, initiated by Southern Copper Company.

Peru is likely to be the epicenter of resistance to mining, with an average of 200 environmental conflicts since 2008.

In Brazil not only resists to megamining but large hydropower projects like Belo Monte, along with the many real estate speculation projects (urban extractivismo), progressing feverishly as Rio de Janeiro ahead the 2016 Olympics.

Features of the people class struggle in South America 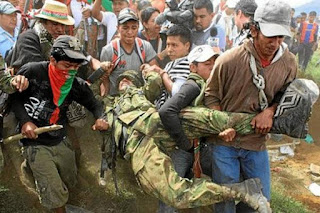 So far there is no unified or centralized resistance, or regional scale in the different countries, but the multiplicity of struggles is coordinated in the streets, without unified platforms. As the latest report of the Observatory of Mining Conflicts in Latin America (OCMAL) shows, all this effort to sustain the extractive mining is increasingly criticized and discredited by large sectors of society, and that mining system can not convince the population of its advantages (OCMAL, April 2015, p. 101).

There is some similarity between the current resistance to extractive model and worker resistance to Fordism in the 1960s. Factory workers reached to dismantle the productive systme thanks to a direct resistance in each section and in each workshop, based on direct action without relying on the union bureaucracies, until the discipline and the labor division were defeated. Seems necessary to insist that was not an institutional struggle, not even openly declared, but so effective that overcame the capital in their own fiefdoms, factories, forcing them to a complete restructuring of the productive apparatus.

Something we can learn from that wave of workers' struggles is that to defeat a model of domination the focus is what happens on the ground where the model is applied, governments and state administrations being completely irrelevant. Direct struggle and resistance are irreplaceable, as taught by the chronic collected in countless works and stories.

At this point it should be noted that there is a moment of defeat or final fight, as the verse of The International hymn says, because what matters is the long process of direct actions that achieve to lock the mechanism of domination. Since Fordism and Taylorism were implemented until they were overwhelmed and neutralized was spent over half a century; two or three generations of workers were needed to find the weak points of the Masters gears.

What have we learn
What is happening against extractivism should be source of multiple learning; with a place in the history of Resistance and one eye on the present, we can draw some conclusions. 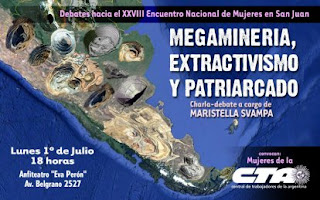 The first is that the Resistance is carry on by indigenous people, blacks and mestizos from the areas where mining unfold, monocultures and infrastructure megaprojects. This is a large and heterogeneous network of farmers, rural workers and inhabitants of villages, which highlights the role of women and their families. It is a face to face with corporations and governments, without support of the institutions, which are present only when the most of the population is fighting in the streets.

The second is the importance of protecting the water, the main common good affected by the extractivist. In some countries, such as Uruguay, the urban population began to react against the model when the deterioration of the quality of the water consumed is evident. It boost the partnerships between rural and urban, between grassroots groups and unions, between workers and scientists.

The third is the variety of struggles that, at some point, become massive and cause the social unrest. Are not spontaneous but the result of a long outreach and organization. This happens these days in Arequipa, where most of the population of villages and towns, first, and of the great city then, turns against mining.

The fourth is the importance of small local and regional groups, composed of activists and neighbors, young people generally. Such groups are critical because they share the initial information that start discussion among broad sectors of the affected populations.

Extractivism is an idol with feet of clay still a far from collapse but we can see noe how faints.

Shut Down the Systems that Jeopardize our Future! This Fall "Flood The System"

Shut Down the Systems that Jeopardize our Future! Flood The System
#FloodTheSystem - Fall 2015 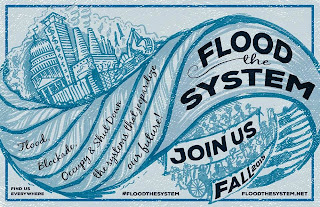 Rising Tide NYC organizer Sandy Nurse said, “Last September four hundred thousand of us were in the streets of New York for the People’s Climate March. The next day, thousands joined the Flood Wall Street march and sit-in, shutting down the heart of global capitalism. Now it’s time to join with and support other movements in rapidly escalating the pace and scale of our resistance to the level of the crises we’re facing.” 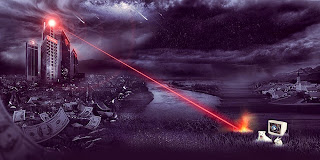 WASHINGTON — On Tuesday, BattlefortheNet.com launched the “Internet Health Test” to collect data on Internet speeds across the Web. The test is an interactive tool that lets users run speed measurements across multiple interconnection points and collect data on whether and where Internet service providers are degrading online speeds and violating Net Neutrality.
Demand Progress, Fight for the Future and the Free Press Action Fund launched BattlefortheNet.com in 2014 and will ask more than a million members across the United States to run the Internet Health Test on their devices.
Anyone can take the test at: battleforthenet.com/internethealthtest/
In February the Federal Communications Commission voted to implement strong Net Neutrality protections, banning ISPs from blocking or throttling Internet users’ ability to connect to any website or service of their choosing. By letting users run continuous tests for the next three to six months, the Internet Health Test will amass data to determine whether ISPs are breaking the rules.
Researchers at Measurement Lab, an industry and research coalition, will evaluate the data. With the information the test yields, open Internet advocates will be able to identify potential violations and provide a strong benchmark for FCC enforcement of the open Internet rules.
“ISPs have long degraded speeds that Internet users paid for,” said Free Press Action Fund Internet Campaign Director Candace Clement. “Now that we have real Net Neutrality rules on the books we can hold companies like Comcast to account whenever they interfere with our speeds and mess with our content.”
“After repeatedly watching Internet service providers slow down people’s Internet connections we’re not going to just sit back and trust Comcast, Verizon and AT&T to follow the new open Internet rules,” said Fight for the Future Campaign Manager Charlie Furman. “The Internet Health Test is our way of sending a message to ISPs everywhere that we’re watching and we won’t let anyone throttle the Internet.”
Published by Pablo Heraklio en 17:08 No hay comentarios:


March Against Monsanto – spanning 6 continents, 38 countries and 428 cities. On May 23, millions of activists from around the world will once again March Against Monsanto, calling for the permanent boycott of Genetically Modified Organisms (GMOs) and other harmful agro-chemicals. A comprehensive list of marches.

This weekend on May 23, 2015, hundreds of thousands of concerned individuals will March Against Monsanto spanning 6 continents, 38 countries and 428 cities to protest against Genetically Modified Organisms and the Monsanto Corporation. This movement seeks to raise awareness to the dangers surrounding Monsanto’s genetically modified crops, cancer-linked herbicide Roundup and will call for an end to the days of unknowingly buying genetically modified food.
Go to our March Against Monsanto LIVE page.
The annual campaign comes as the demand for GMO labeling and non-GMO food alternatives continue on a exponential climb. While GMO labeling legislation battles are being fought across the globe, concerned people spearheading the projects are facing-off against multi-national corporate influence, the time to stand in solidarity and scream Hell No GMO’s is now.
In polls conducted by the New York Times, Washington Post, Consumer Reports, and many others, over 90% of respondents were in support of national GMO labeling – an initiative that has been defeated time and time again at the state level thanks to heavy spending by Monsanto-backed lobbying groups.

Highlighting the concern over Monsanto’s creations is the latest report from the World Health Organization, which listed Monsanto’s best-selling herbicide Roundup as a ‘probable carcinogen’. This finding has drawn many researchers and health experts to stand behind the goals of March Against Monsanto.
“There’s no question that March Against Monsanto is the most powerful grassroots initiative we have in the fight to reclaim our food supply from the GMO seed juggernaut known as the Monsanto Company,” said Anthony Gucciardi, March Against Monsanto speaker and founder of the natural health website NaturalSociety.com.
“With the new admission by the World Health Organization that Monsanto’s best-selling herbicide Roundup is causing cancer worldwide, now is the most important time to join the movement and take a stand.”
Despite claims by the multinational biotech giant that genetically modified crops would actually lead to a decrease in Roundup use, U.S. Geological Survey data reveals the use of Roundup’s key component glyphosate has increased 16-fold since the mid-1990s when GMO crops were first introduced.
As we do every year we will be covering the March Against Monsanto 2015 events. You can tag us @NewsRevo in a tweet, post your image to our Facebook page or send us your video in an email (revnewsmedia@gmail.com) to help us broadcast the days events to the world.
Follow events with the Twitter hashtag #MAM2015 and see below for a list of events.
The listing below was updated on May 18, 2015 with Marches that have Facebook Event links.
A world wide event has been created here.

e will gather updates and live video streams as events traverse the time zones of the world.

Washington DC in front of the White House