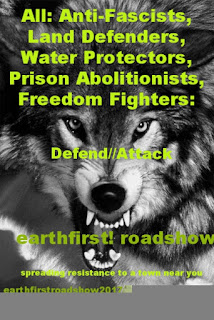 Greetings all rabble rousers, water protectors, land defenders, anti-fascists, and resistance fighters.
In light of all the insanity that is our present political climate, a group of Earth First!ers are excited to announce the 2017 Earth First! Roadshow.
We’ll be hitting the road and planning a two month long cross-country roadshow that will end at the Round River Rendezvous in Northern California! We want to nurture the inspiring seeds of dissidence, learn about and support various cross-country struggles, and connect people and places to a political platform of “Fuck Trump and all the white supremacy, eco-terror, and rage he instills.”
Beginning in late April, we’ll be kicking off our tour in South Florida, and we aim to plan a route that coincides with several action camps and conferences throughout the country. Dates and places to be announced. Will you have us?
Small and rural towns will be given priority as we hash out dates and times. Get in touch with our collective to receive a list of skillshares/workshops we can offer in addition to a short presentation promoting biocentrism within a cross-struggle framework.
For all that is wild and toward a more free world,
Your friendly 2017 Earth First! Roadshow crew
For booking, questions, and comments, email us: earthfirstroadshow2017@riseup.net
earthfirstroadshow17.wordpress.com for tour updates
Published by Pablo Heraklio en 9:48 No hay comentarios:

The insurrection of Ixmiquilpan – Ruptura Colectiva 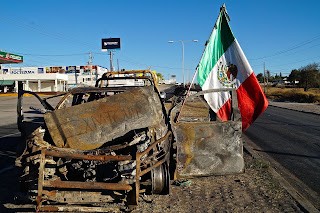 Hidalgo is a territory with past struggles, hidden in the pages of history and in the centralized understanding of social movements that don’t permit knowledge of what happens “over there in the province”. On January 5th, the people of Ixmiquilpan and other distant peoples of the Mezquital Valley would know what class war is. At the sound of the 2017 new years bells, various entities of the country were met with complete blockages of highways, Pemex facilities, gas stations and other strategic points in the context of the national #NoAlGasolinazo protests.
The closure of the Mexico-Laredo highway was one of the strongest, until it was met with an army (yes, it was an army trained to assassinate) of the state and federal police. This confrontation took place on January 5th in various points on both sides of the four-lane highway blockade, all with the intention to displace the people in resistance. At 2:30 pm, a gigantic trailer divided the contingents of the battle: on one side, an operation of more than 100 trucks and patrol cars with officers armed with firearms and tear gas; on the other, the people in resistance with sticks, rocks and firecrackers—tools that would served as instruments of war for the neighbors that took to the streets. The bells of Barrio de Jesús echoed for miles around.

The people won the first battle. It was evident that they would not lift the blockade. The forces stayed at the bonfires and barricades for long nights and were not willing to negotiate. Some state authorities offered to “form a commission to assist the House of Representatives and to thus avoid the violence,” but the people refused, rather reinforcing the barricades with sand bags.
The police forces returned with more strength. Armored cars and bullets pushed the people of Ixmiquilpan back. On the sidewalk, two youth were caught in the heat of the battle: 22-year-old Alan Giovanni of the community Dios Padre and 25-year- old Fredy from the community of Maguey Blanco. They both lost their lives from bullet wounds. Thirteen others were injured.

I’ve said it before: death is imperative to the consciousness of social being. Voices and tears were more aware than ever and did not confuse words with actions: “This was violence from those of above, nearly a massacre!”
Although social-democrats and opportunists like Gerardo Fernández Noroña, John Ackerman and Javier Solalinde (El Padre Solalinse) have moved to preach peace in times of war and the importance of the electoral process, in the community assembly there are community members and affinity groups that are working hard to direct the struggle toward autonomy.   They are working toward the total self-management of life in the municipality, to rupture the dependence of people on political representatives. “Nobody will come and save us.”
There are some complaints against the mass media that talk of “chaos”, a “conflict” or a “final battle” in what clearly was the direct expression of class antagonism in an act of extermination against totally legitimate protest.

On January 19th, more than 2000 people marched in the city of Pachuca. They protested outside the congress to demand dialogue with the deputies that have approved the structural reforms: the media again, almost jokingly, said that the protestors “retained”, “cornered”, or “kidnapped” deputies. What side are the independent journalists on? They are small seeds that the people are planting, in order to move towards communicative autonomy, leaving paid and self-referenced cartoons to the “specialists of communication.”
After the insurrection, the organizational activities increased. On Sunday, January 15th, the state gathering “No to the gasolinazo” was celebrated with the participation of dozens of delegates from Hidalgo, teachers of the CNTE and people from other struggles in the country. On the 19th a march in Pachuca took place which culminated in the already mentioned “popular kidnapping” of deputies of the PRI. On Sunday the 22nd of January, workers from various multinational stores and institutions affected by the blockades, marched to demand that the “rioters open our centers of work”. For their part, the people of Ixmiquilpan gathered in the parking lot of the Comercial Mexicana to continue directing the routes of movement.
The stores remain closed until the workers have better salaries and that, in agreement with the managers and bosses, products of the campesinos of the municipality are bought and distributed in the stores. The banks only open every three days so that the people can collect or send money. The police aren’t welcome. The corollary is of vital importance: A popular consultation took place to remove the municipal president. Interesting things are being developed; the blood did not run in vain.
Today, the bone-metal remains of the arm of the state lie in the highway and the ghosts scream throughout the four lanes: we do not want any more dead!

Published on February 27, 2017 in:
Published by Pablo Heraklio en 0:49 No hay comentarios: