At 3 am on Wednesday November 13, 2013 Spanish police raided the home where Monica and Francisco lived, in addition to detein other 3 housemates. 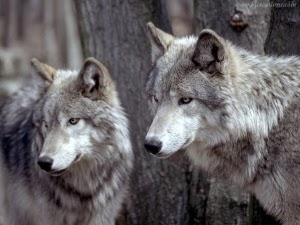 The police, prosecutor, mass media and Homneland Ministers (both Chilean as Spanish) state that both partners have placed a bomb in the Basilic of Pilar, action vindicated by the "Mateo Morral Insurrectionary Command" on October 2, 2013 in Zaragoza, Spain.

To recall that both partners were prosecuted, imprisoned and faced one of the longest trials in Chilean procedural history in the "Bombs Case". Charged under anti-terrorism law for the crimes of terrorist conspiracy and explosive placement remained about nine months in maximum security prisons of the Chilean state, after being acquitted of conspiracy faced trial along with the other 3 partners for various crimes (terrorist artifact placement and terrorist financing) to finally be acquitted.

According to the information we have, both comrades will be in police custody until Friday 15 where they should declare before the judge of the National Audience (in charge of terrorism cases) Eloy Velasco, for offenses under Article 570 of the Criminal Code, anti-terrorism legislation with 15-20 years sentence.

Later that November 15 will be seen if the judge accepted the request for remand for both comrades. In parallel, different characters (each one more dire and sinister) take turns giving statement, celebrating the arrest and threatening to reopen the "Bombs Case" process.

From here we will transform these kilometers away in an insignificant obstacle, silence the voicesof  the masters that resonate from the two countries, we will walk ignoring the threats of decades and decades in prison for a hug of solidarity that is based far from the crackdowns ...

Brief Chronic and comments about the Falange fascist act in commemoration of its 80th anniversary in Lavapies Madrid neighborhood. Oct 31, 2013, Madrid. 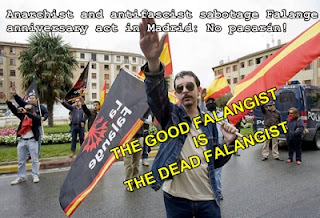 The Falange intended to carry out in the theater Figaro, next to the Plaza de Tirso de Molina, Madrid,  the celebration of its 80 year taint with the bloody history of hundreds of thousands people killed. Finally, and although Figaro Theatre managers tried to justify the presence of fascists in their space, the pressure exerted paid off, and the fascists had to pass on the sly the ceremony to TRYP Resort in Atocha Street.

The response of anarchists and other anti-fascists individuals was organized as fast as we could, due to the uncertainty throughout this week about the venue of the event. The night before the ceremony, Madrid Libertarian Youths drafted a rejection statement calling the fight against fascism in all its forms, stressing the need to fight also against capitalism and the state as institutions of which fascism is served to strengthen. Figaro theater nearby woke posters full of this statement and several painted showing the fascists were not welcome in our neighbourhood. The text, made ​​it clear that we can not forget that fascism has a role pressuring the State authorities to deepen racist and xenophobic policies, already inherent in any form of state. Fascism is and will always be a resource use by the ruling class to remain the power, either making use of fascism to stop the revolutionary forces, or showing the democratic dominance as submitting system necessary to contain totalitarianism.

Police protected at all times the hotel and its surroundings, identifying and retaining some anarchist and anti-fascist groups who tried to prevent the holding of the of praising fascist act.

Serve also this statement to warn those assisting the fascists and helping spread his message of racial hatred, authoritarian, sexist, homophobic, providing spaces are considered in the same ilk as these lunatics. Will face the consequences.


NO STREET, NO NEIGHBORHOOD, NO BREATH FOR FASCIST

AGAINST FASCISM AND ALL AUTHORITY: SELF-ORGANIZATION, SOLIDARITY AND DIRECT ACTION

Statement stuck in the vicinity of Figaro Theatre:


THE FASCISTS ARE NOT WELCOME
NOT HERE OR ANYWHERE

80 years ago, the Falange fascist organization was founded in Madrid. The party, which developed his political theory around the national-unionist, soon showed its oppressive reactionary outlook. Its members served as vigilant shock troop against the revolutionary workers' movement in the 30's in Spain. There were many clashes that the working class hold with fascism while also beating against the bourgeoisie and the Republican state, which from its inception was another attempt to settle exploitation disguised as liberal regime.

What happened then, is well known. Falange was used as political channel for Catholic Church, bourgeoisie and the military in an attempt to shackle the working people by the year 36, after the clear signs of be able to definitely overcome the bourgeois order that kept them under the yoke of exploitation and oppression. Was thus, bourgeoisie who raised Spanish fascism, phalangism, and used it to plan a genocide and extermination of hundreds of thousands of workers, anarchists and other political forces, with the help of Italian Fascism and German Nazism .

The huge work of revolutionary transformation that took place in vast areas of Spain, where from July 19, 1936 was able to halt the military and fascists, was first betrayed by Republican leaders and left-wing bourgeois parties (beginning a violent persecution of anarchist militants and other workers who also saw the need for a social revolution to stop fascism), and was finally destroyed with the triumph of the fascist side in the contest. More than 40 years of death, exile and imprisonment would expect to hundreds of thousands of people, that never stop being a nuisance to the Franco regime and its pet-party: The Falange.

80 years later we have a "democratic" regime that continues with the exploitation and domination as in the so-called dictatorship, but with subtle forms.

Leveraging the context of capitalist crisis, fascism tries to rise and anchor its racist, homophobic and reactionary on society. While various States of the European Union exercised evident persecution to workers because of their skin color or origin, the old fascism tries to take its place.

Acts like the Falange 80th anniversary commemorating, in a working class neighborhood as Lavapies, and in presence of many workers from around the world, show that fascism tries again to take a place with the clear complicity of judges, police and entrepreneurs. Democracy and fascism are two sides of the same coin, different ways of practicing racism and dominion over people, but aim to keep the same capitalist system that engenders. State and Capital found in fascism and its racial hate messages a vigilante-killing force to strengthen both in the streets and at the level of discourse .

AGAINST THE STATE, CAPITAL, FASCISM AND
ALL FORMS OF AUTHORITY : SELF-ORGANIZATION,
SOLIDARITY AND DIRECT ACTION