The Global May Day aims to connect emancipatory May Day activities around the world. It was initiated by individuals organized with the Free Workers’ Union (FAU Hamburg), Industrial Workers of the World (IWW Gainesville and IWW Hamburg).
Furthermore Inter-Factory Workers’ Federation (FBLP, Jakarta), Bangladesh Anarcho-Syndicalist Federation(BASF), the Garment Workers’ Trade Union Centre (GWTUC, Bangladesh) and the Forum for IT Employees(FITE, India) were involved from the beginning. Check this link for the complete list of supporters until now.
The common global framework consists of these three elements: 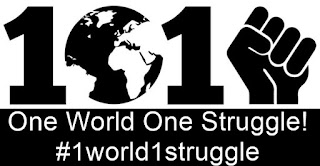 Each syndicate/group/union organizes its activities with their own focus autonomously. This common framework will help to visually connect those activities and support communication on the global level. Feel free to subscribe and/or contact the Global May Day 2019 mailing list [globalmayday@lists.riseup.net], if you support the call and/or want to connect with others to establish a solidarity partnership.

Crowdfunding for the making of the documentary "Durruti: Son of the people"

"Durruti: Son of the People" is a documentary-research project that seeks to reconstruct the anarchist Buenaventura Durruti's life

Through different audiovisual resources such as recreations, animations, interviews with relatives of Durruti, testimonies of historians, we will enter into a historical plot that goes from the 1917 strike to the social revolution in 1936, through the CNT rise, the years of the "killer patronal", the Primo de Rivera dictatorship and the Second Republic.

The idea is to investigate who this historical character was. Within the documentary will be shown the historical research works and will appear the many locations where Durruti's life went. We will also use the narrative resource of different voices to narrate the anecdotes and appreciations left by historical characters that coexisted with Durruti. For all this we are doing a work of historical documentation. The interviews with historians and researchers who have worked on the subject have a great weight within the documentary. To reconstruc the story we have personal photographs given by the CNT archives as well as material from the National Film Archive. To reconstruct some scenes we will use drawings made by the cartoonist Agustín Comotto and will use reconstructions of some other scenaries.

If we overcome the barrier of 12,000 euros we could do some reconstructions

The idea is that the documentary takes a cinematographic look.

SOME PEOPLE TO INTERVIEW

Some of the people whose participation is confirmed in the documentary are those following:

Dolors Marín: Doctor in Contemporary History from the Barcelona  University with a thesis on the formation of the libertarian culture in Catalonia and the organization of anarchist affinity groups.

All contributions are rewarded with a link to visualize the documentary. For the realization of the documentary we have illustrations by Agustín Comotto whose plates are part of the rewards as well as the poster of the documentary that will be done by hand at the Can Batlló Colective Printing Company (fcbk).

We have also design some cloth bags with the phrase "we bring a new world in our hearts" that will be delivered with contributions of over 30 euros.

Pewmafilm and ungovernable productions try to use the audiovisual resources to bring light to those stories and points of view that have no place in the mass media. We are part of ACATS (Associació Col·lectiva Audiovisual per a la Transformació Social)

Along these years we have made documentaries about the Mapuche people struggle (The Return of the Weichafe), the anarchist movement in Catalonia (Ingobernables a tour by the anarchist Catalonia), the social struggles in Catalonia (Poble Rebel), about the application of anti-terrorist law to social movements (The government of fear) or the last work funded by verkami "In the Breach, anarchists against Franco".

The objective is to use audiovisual creation to fight neoliberal hegemonic thinking and to carry out a work of social conscience that favors a social transformation towards a more just, free and equal society. We have been making documentaries and videos about social struggles for years, just as we have made hundreds of presentations with thousands of people who during this time have seen our work.