The Tree of anarchy, or Anarchy explained to children 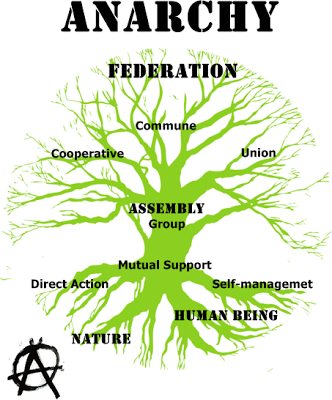 Anarchy is a philosophical system, which determines a whole way of thinking and understanding live different from the rest of nature and political systems because of its implementation are derived behaviors that determine how interact and how to use the environment.
Like a tree anarchy clings to the soil in the world trying to grow up looking for the sun of reason and down the deep water of human desires. Anarchy has:

Roots that feed it: Self Management, Direct Action, Mutual Support
The roots sink to feed, as could not be otherwise, in man and nature, our world. Man is a social being and should relate to other men and with nature to survive and develop. But in the multitude of relationships that exist anarchy is based on three simple principles that guide it.

Self-management or independence, in which the person recognizes his own will and do for itself, and help their peers to make theirs also accepting their help. This principle is in opposition to patronage or dependence in which a person must do the will of another, and is forced if want get something inaccessible by itself, like food. The one is voluntary, the other is obligatory.

There is not always agreement among people. Direct Action proposes direct dialogue between affected disagreements. And even if there is no agreement are their similar and equal those involved in the dispute. This is opposed to indirect or deferred action on one or more intermediaries arbitrate disputes. And when you accept arbitration you accept its authority, with the many implications, such as the establishment of laws, judges and police officers, with corruption and abuse that implies. So anarchists are anti-authoritarian.

Mutual support, or solidarity. Clearly get developed in a social and natural environment requires some agreement among people. For convenience and conviction it is acted for other individuals fulfill their goals and this are committed to helping in performing our own, must be reciprocal. This is in contrast to trade in which a person obtains property only if paid or exchanged, or to charity, in which a person receives only helps the giver will raise without common goals, or slavery in which a person it is alowed to live in exchange for services provided to the master.

Creating a meeting point, discussion and decision-making among equals, the assemblies are formed. In they are taken by majority or consensus the agreements, as opposed to the councils, in which a select few make agreements, or headship where it is only one person who makes decisions.

For man living it is need materials from environment, which involves work. This work may be as employee, working for one or more masters, or for themselves, working on their own.
- If you are self-employed, for themselves, it is form cooperatives, following the assembleary principles.
- If you work for one or more masters the group comes together to protect their aggression and exploitation attempts is called union. His goal is to conquer the mean of production and cooperativize.

Communes are the colloquial name of traditional clusters formed for the management of housing, living environment, connectedness and supplies.

And when the strength, the will and the organization are sufficient, voluntary groups come together in federations of autonomous groups, assembly, self-managed, practicing solidarity and direct action to address their problems and achieve common goals among all.

What about us? WE ARE THE LEAVES WHY TREE BREATHE.

The TARCOTECA is Anarchy
Published by Pablo Heraklio en 15:50 No hay comentarios:

Fire Cells in Madrid: Claiming the placement of an artifact in La Almudena Cathedral


Press claiming of explosive device placement at the Almudena Cathedral in Madrid.

The social culture broth kindle our hearts and active our minds. Action-Reaction: unemployment, home evictions, fascist attacks, mass suicides, spoliation and humiliation resulting creation Group of Fire, a force that can not be stopped because it is in our mind. Create a group of fire, fire cell, is extremely easy. That members evoid jail is extreamly difficult.


The house of God stick in ass in Madrid (Thursday February 7, 13 hours)
We demonstrate that your sanctified haunts  are vulnerable. The foundation of your power have trembled for our sacrilegious kilos of powder, seeking to break your peace civic based in dead people and people locked up for years in the slammer. This is the vanganza. We overcame the barrier of fear.

The target of this explosive explosives is clear , to rock the Bourbon monarchy in their holy places. All his majesty is the result of oppression, and will be we the oppressed who end up with it by insurrectionary revolutionary violence. Do not fall into the trap of waiting to be given historical conditions. We believe that conditions are ripe for attack whenever there is state, capital and moreover a rotten fascist royal family . We are determined. No await. We act.

We do not have the mistaken idea that only through such actions will achieve the destruction of all that oppresses us. We are not deceive. We self-please. This is publicity by facts existing over a century ago between the rebels and conspirators against power. It is a call to war without limits using all our imagination and energy to end this rotten world.
Fire at sack
Anarchy Alive!
Command Insurrectionalist Mateo Morral http://contrainformate.blogspot.co.uk/2013/02/madrid-reivindicacion-de-la-colocacion.html

Given the abuse of state and capital no aggression unanswered!
Oligarchist wanted to militarize the country and needed an enemy strong enough. We knew that after the fall of ETA, Communists collaborating with the power, lost the golden moment with the Arab yihaidismo after March 11 terrorist atack, the next target would be the anarchists.
Now there is an answer that the power will profit, through their control of mass media, to divert the gaze of their corruption and looting.

Knowing the means at the disposal of the state, group members know that if they don't run away will be taken. Working from prison is an option, but from our point of view is the worst option. It takes people working out, organizing resistance and ready to strike back. Ideally, a unique and unambiguous, but we know that reality rarely conforms to our expectations.

We in tarcoteca are not insurrecionalistas because we not personally believe that the "fast track", this publicity by facts (propaganda por los hechos), although legitimate, brings more disadvantages than advantages. We are aware that union, cooperative or squatting organizations is not giving the expected results, but we still persevere in our efforts. We respect the action of colleagues, understand their points of views and will bring all the solidarity we can.
Comrades, you are necessary more than ever. Health and Anarchy.
Published by Pablo Heraklio en 11:35 No hay comentarios: Late at night on May Day we sabotaged a rail line in Central Oregon to interrupt the flow of commodities. Capital depends more than ever on the metropolis, the constant flow of commodities, services, capital, information, and any interruption of that flow is a small victory. We took this action in solidarity with all those facing investigation, imprisonment, and repression in the Northwest. As we become more dangerous, the danger to us grows as well, but we will not cower in the face of the face of those who would control us. We took this action knowing full well the extent of political repression in the Pacific Northwest in the present. Not because we want to show our defiance or rage to the state; to them we have nothing to say. We acted because our love for our comrades far outweighs our fear of repression, and because love is an action, not a feeling.
This action was quick and easy. Using copper wire with the ends stripped, we wrapped both ends of wire around the rail and buried the middle section. This sends a false signal that there is a train on the tracks, delaying any other movement until the blockage is cleared.

In solidarity with those resisting the grand jury, those facing investigation, and those who, in the face of the media and massive police preparations, still managed to bring some destruction to the streets of Seattle.
5-2-2013
http://pugetsoundanarchists.org/content/rail-lines-central-oregon-sabotaged-solidarity-pnw-anarchists
Published by Pablo Heraklio en 2:39 No hay comentarios: