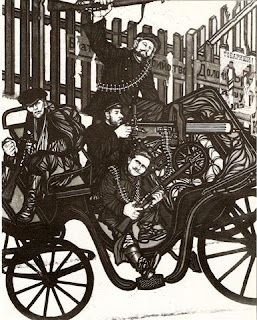 Next public meeting of London Anarchist Federation:
- The Anarchist Movement in Modern Spain
- Report back on factfinding tour of Spanish anarchist movement by AF member

6 reasons why Chomsky is wrong about Antifa


Noam Chomsky recently made some comments about antifa, and militant anti-fascism in general, which were as ill-timed as they were ill-informed. Here's what we think he's got wrong about the subject. 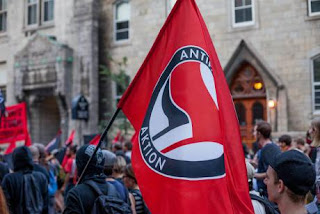 In the aftermath of Charlottesville, the spotlight has been turned on the reality of fascist violence in America. The murder of Heather Heyer is only the most recent in a year which has seen numerous other killings (such as the two on the Portland MAX in May and Timothy Caughman in New York City), with the 2015 killing of nine worshippers at Denmark Vesey's church in Charleston by Dylann Roof showing a continuity of far-right violence long before the election of Donald Trump.
Despite all this, many liberal talking heads have also decided that now is the time to condemn those opposing the fascists. Perhaps the most upsetting, has been the intervention of Noam Chomsky, given how important a figure he was to our politics when we were growing up. But what did Chomsky get wrong?

Chomsky describes Antifa as "a minuscule fringe of the Left, just as its predecessors were" with "some limited similarity to the Weather Underground". While we might take issue with Chomsky's description of contemporary Antifa, another problem is his misrepresentation of its "predecessors".
Antifa's predecessors have almost nothing to do with the Weather Underground. Rather, they can be seen in the mass mobilisation against Mosley's Blackshirts in Cable Street, East London, as well as less famous mobilisations in Manchester, Liverpool, Newcastle, Hulme and Stockton.
They are the 43 Group and the 62 Group, Jewish-led organisations who took it upon themselves to smash Mosley's attempts to reorganise after the Second World War. They are in the mass mobilisation of locals in Lewisham, South East London, in 1977, the Southall Youth Movement who fought skinheads in the streets and Anti-Fascist Action, who regularly routed fascists throughout the country from the mid-1980s to the late-1990s.
In Europe, they are the Red Warriors of Paris or the Revolutionary Front in Sweden. And in North America they were the Teamsters who formed a defense guard against the Silver Shirts in the 1930s, or Anti-Racist Action who took on Klansmen and the National Socialist Movement from the 1980s until very recently.
None of these can or should be dismissed as easily as Chomsky seems to.

2) Antifa are 'a major gift to the Right, including the militant Right, who are exuberant'?

When the extreme-right get smashed by anti-fascists, they are not exuberant.
When anti-fascists in Liverpool wiped the floor with the 2015 White Man March in Liverpool, they were not exuberant; they were utterly humiliated.
When the English Defence League were chased out of Walthamstow in 2012, they were not exuberant, they were utterly humiliated.
The 43 Group, 62 Group and Anti-Fascist Action successfully disrupted organised street fascism in the UK for decades after World War Two.
In all these cases, physical defeats led to increased divisions in the far-right, mutual recriminations and, most importantly, a puncturing of the invincible street-fighter image these groups like to cultivate for themselves.
Of course they will try and spin every defeat as them being victimised. But, they would just as much spin any unopposed march as a successful show of force, especially if they go searching for targets afterwards, as they have done in the past; 'ignore fascists until they go away' only works if you have the privilege of being ignored by them as well.
A physical defeat is not a gift to the militant right; it is one of the most effective ways of keeping them weak. Attendees of the 'White Man March' not looking very exuberant as they hide in Liverpool Lime Street's left luggage department, 2015.

3) Denying fascists a platform is not 'wrong in principle'

Perhaps Chomsky's most dangerous claim is that "What [antifa] do is often wrong in principle – like blocking talks". We say dangerous because it encourages people to provide space for fascism to grow in.
There is nothing wrong with denying fascists a platform, whether these be rallies, demonstrations, public meetings or debates. Fascists use their platforms to build strength and, as they grow stronger, to attack their opponents.
We are not duty-bound to give fascists somewhere to spread their hate. In 2002, the train drivers' union, Aslef, expelled a member who had been a local election candidate for the far-right BNP. Perhaps Chomsky thinks this is wrong? Perhaps they were duty bound to accept a member who would sow divisions between white and non-white members? Perhaps Aslef should have organised a public debate to hear him out?
Fascists love it when liberals provide them with a platform. It helps them spread their message so that they can build numbers and confidence to crush their opponents - liberals included.
These platforms - whether on city streets or in debate halls - should not be provided.

4) Street confrontations are not always won by 'the toughest and most brutal'...

Chomsky claims "When confrontation shifts to the arena of violence, it's the toughest and most brutal who win – and we know who that is". Yet mass anti-fascist mobilisation can shut down fascists without being 'the most brutal'. In Liverpool, fascists ran to hide in a train station's left luggage department after being outnumbered 10-to-1. In Brighton, fascist marches have been made impossible without heavy police escort due to mass local opposition.
Ultimately, the most powerful force in society is the working class. We can always win when we turn out in force.

5) ... and the far-right aren't always 'the toughest and most brutal' anyway.

It is the stuff of far-right fairy tales that they have the monopoly on using violence. The experience of Post-World War Two Britain is that the far-right, for all their bluster, were not as 'good on the pavement' as they thought they were. From the 43 Group to the 62 Group to AFA, the far-right were frequently beaten on the streets.
While it is important that we focus on building mass, working-class anti-racist movements rather than crack squads of elite anti-fascist special forces, it's also important not to perpetuate the myths which the far-right perpetuate about themselves. Just look at this loser for a start: 6) Physical opposition to fascism does not negate 'constructive activism'

Chomsky's claim that one of the "costs" of physical confrontation with fascists is the "loss of the opportunity for education, organizing, and serious and constructive activism" is a false division. Moreover, it's one that shows a lack of real-life contact with anti-fascists.
In reality, anti-fascists often are involved in activity beyond 'anti-fascism' whether that be migrant solidarity, union organising, anti-police violence or whatever else. They hold film screenings, concerts and football tournaments. The fact that Chomsky misses all this says more about him than it does anti-fascists.
If people are prepared to put their lives and safety on the line to resist fascism that's a choice which should be celebrated. Community self-defense can create space for other organising to happen, whereas un-opposed fascists will happily crash and disrupt left meetings and organising.
A big contingent of antifascist mobilisations in the US have been associated with the IWW, a radical union which puts huge importance on serious, constructive education and organising. You can organise at work Monday to Friday and oppose fascists when they occasionally come to town on Saturday, that's not much of an 'opportunity cost.'
Ultimately, it's important to remember that 'anti-fascism' will never be enough to defeat fascism; in fact, there is no defeating fascism without defeating capitalism. That means building a mass, working-class political culture that stands as an alternative to both the far-right and the liberal politics of 'business as usual': vibrant workplace organisations both inside and out of traditional unions, community groups fighting on housing, police brutality, proper provision for survivors of domestic violence, migrant solidarity, and so much more it couldn't possibly fit here.
We mustn't think of antifa as an end in and of itself. But we don't need the left's most prominent public intellectuals to throw them under the bus either.
Published by Pablo Heraklio en 8:33 2 comentarios:

Fascism Here We Come: the Rise of the Reactionary Right and the Collapse of “The Left”

Source - Fascism Here We Come: the Rise of the Reactionary Right and the Collapse of “The Left” 15.8.2017by ANTHONY DIMAGGIO 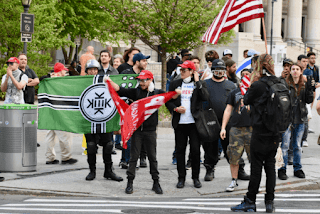