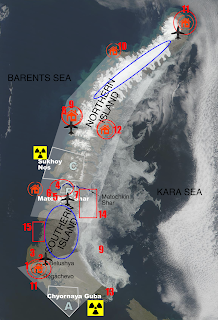 Novaya Zemlya Archipelago (Новая Земля, Novaya Zemlya, "New Land" [6]) Natural arctic paradise was transformed into a radioactive hell the day that was chosen as a testing nuclear arsenal and radioactive landfill. His story will be forever linked to the Tzar Bomb [1], [2], the largest atomic monstrosity ever launched on earth.

The Arctic Line is the first Russian defense against a possible invasion from the north. Also is the source of gas and oil [3]. Its protection is vital to the established order. The rearming of the area is inevitable as we are seeing in recent times [4].

Governments have been testing nuclear weapons in these islands since the 50s and then used them as dumping grounds for the eternal toxic waste, becoming one of the world's most polluted areas, paradise of mutants. Russia will not hesitate to use nuclear weapons to defend them.

The only force able to attack Russia is NATO. It would not be defeated by land, so we will not see long fortifications as in the WWII. The war would be decided aerealy thanks to radar systems, hidden missiles batteries between mountains and especially thanks to submarines.

We do not know the level of staff turnover, but it must be quite high, because the radioactive exclusion areas that actually cover the entire island. Of which, can be assumed that the bulk of installations are underground, protected from the cold and high-energy clouds, coated with gross lead plates.

In the past this archipelago in the Russian Arctic was boast with a unique ecosystem. However, after 1954, when it become nuclear weapons testing site, it that took up half of the surface of the island, the prefix 'eco' lost all its meaning.

This field testing site of Novaya Zemlya was the scene in 1961 of the most powerful nuclear weapon detonation in history, the Zar Bomb (AN602) . This Bomb had a power thousands times that ones of Hiroshima and Nagasaki (51.5 megatons) and was one of the reasons that led to the signing of several international treaties for banning nuclear tests. In addition, the bays of the archipelago were used to store radioactive waste. Catastrophes Alert [5]

With an average temperature of -2°C, 100 days of sun, 0 hours of light between November and January. The southern part of the island is dotted with thousands of uncontrolled radioactive waste dumps, virtually every one of the fjords, more than 100, and even offshore. The area can be consider  as a paradise orchard, only for mutants.

What Russian propaganda tells About the island


Russia has almost completed construction works on new defense installations on islands in the Arctic, and the military expects to be operating in the new bases before the end of the year, according to Russian media.
In March 2015 the Russian military held major exercises on the orders of President Vladimir Putin, seeking to test its readiness to counter challenges in the country’s north and particularly in the Arctic. The drills involved about 38,000 troops, 41 ships, 15 submarines and 110 aircraft.


An unidentified Defense Ministry Sources told the newspaper Izvestia that in mid-summer, construction works will be completed with the construction of new barracks and checkpoints in the Novaya Zemlya and Norther Land archipelagos, as well as the in the Alexandra , Franz-Joseph and Wrangel islands.


The Northern Fleet meets this June 1 the 282 anniversary of its founding.
The admiral added that the air defenses of the Northern Fleet has began its rearmament with the S-400 anti-aircraft missile complexes, and certain arsenals Arctic units with Pantsir-S missiles complexes are already present.

Coastal missile system Bastion, armed with anti-ship missiles Onix 24, is able to guarantee the defense of a coastline of over 600 Km against enemy landing operations.

Overview of the current nuclear situation

Today, the world has around 17,300 nuclear warheads, although its exact number is impossible to determine, Russia is the country with the largest number of warheads (8,500) followed closely by the United States with 7,700.

It is estimated that each of the two great powers has around 1,800 bombs ready to be launched at any time. In any case, the number of warheads is today less than 25% of which was at the time of the Cold War, in the mid-eighties.

Today, as then, the axis of the nuclear defense of the great powers are not the bombers or missiles, although they occupy the center of the popular imagination, but nuclear undetectable submarines and, in the case the Ohio Class US, they can each carry more than 200 hydrogen bombs, each with a power hundreds of times greater than Hiroshima.

Which countries have nuclear weapons?
https://www.youtube.com/watch?v=hB_lLfnkV3k

Where are not hidden the bases
- Not in the atomic test areas, because of radioactivity, which could interfer the equipment. That excludes a quarter part of the island.

- The barracks are not in near the coast, which excludes half of the island and quite limites the location of the equipment. This is due to the porosity of the rock and the likelihood of flooding in the event of a nuclear attack.

- We did not find images of quarry areas, but many alluvial fans, which could mask subterrain excavations. Mining areas seem quite neglected.

- The missile silos are well hidden and camouflaged, besides its small size. The only thing you can see are the old structures and a large network of roads and rails. It is quite likely that in an attack usasen mobile devices.

- Of the 13 airfields we have found only 4, are well hidden. Places and marks on old maps. Atmospheric control towers are scattered across the terrain.

Where could be found the bases

- Having mountains over 1,500 m is quite likely that are placed there.

- The maps are outdated and there is ample undercover areas. We don't know since when, but these areas coincide with mountainous areas, and therefore with possible bases, mainly missile silos and radars.

- We have found many roads and railways to get "nowhere" in the mountains, so we can deduce that are underground.

- The most other areas covered are located in the northern and central mountains, making them the most likely location silos, barracks and equipment areas.

- If we consider the Japanese islands tunnels design in the 2WW, which allowed them to maintain 2 fronts at once throught intraterrestrial railway, and we think on modern tunneling machines, we can say that these islands are empty inside and furrowed north-south and east-west.

What have we found 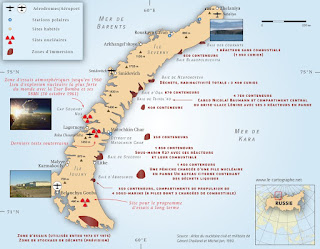 Here a French map indicating nothing more and nothing less than the areas of "diving" and that has guided us initially. Idyllic tourism. Brown areas landfilling. Good schematic map.

On satellite photos we see that the image of the archipelago appears fully edited and pixelated in many areas, making it impossible for any identification.

They have disappeared from the images several settlements, physically or pixelating covert. The southern part of the island is clearly less populated because of all the pollution.

We refer to the first map of this post.
To find the loalizaciones of the photos you only have to enter the numbers of the lower panel in each photo and introduce it in the finder browser at google maps:

A-Area is crisscrossed by roads and perpendicular paths without beginning or apparent purpose. Dunpping area for radioactive waste, both by immersion in its fjords as burial in silos. A real Dead Zone. 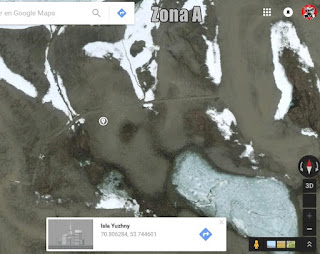 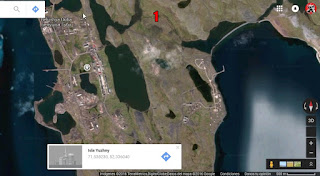 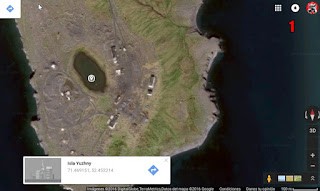 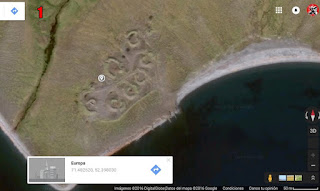 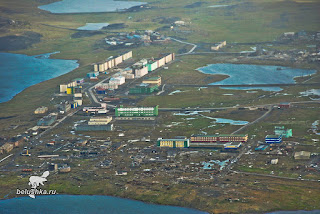 2 Belushya- High-capacity airport. With 3 tracks,  2'5km the longest. It is located in a hidden area of more than 40 km long. Able to accommodate heavy transport.
Hangars are not observed, so it is covert or underground structures. 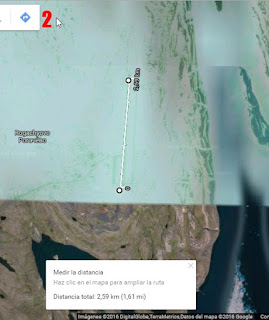 Belushya pixelated area 40 km north to south, connecting with the former nuclear test sites at south side of the channel. 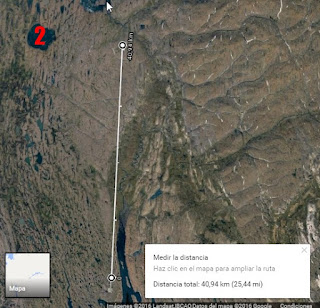 3 Rogachevo's northern roads and facilities- Rogachevo connects with the airport. We found gas deposits and other buildings that we can not identify with this level of resolution. We also find bridges connecting the fjords. 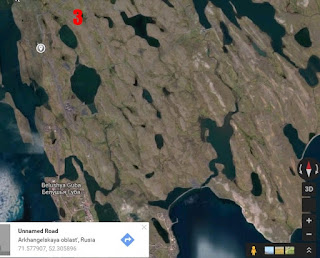 Facilities located along the Rogachevo road 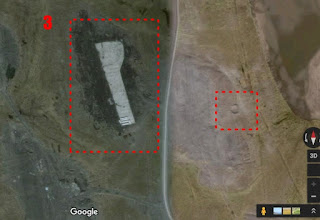 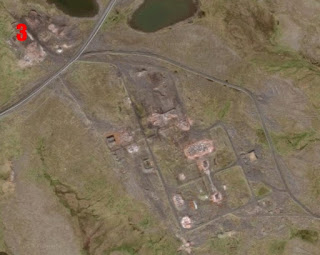 B-Zone- appears to be the military settlement zone and control of nuclear tests carried on the north in the area known as Zone C or Dead Zone and south side of the channel, in an unclassified area but with many buildings. Formed by structures 4, 5, 6 and 7.

4 Legernoye- in the East Village in the channel Matochkin Char, north shore. It includes port. Today looks abandoned. Box what looks like a silo.

5 Reka Choumilikha Mountain Area, 1450m- underground testing site. Ridged area of railways and roads to the south. Of course, not airfield found.
- Observe circles which could correspond to silos or warehouses. Also a control building at channel's south area from which start several rails and roads. 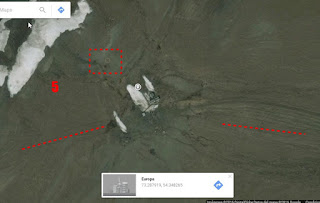 Zone 5 roadways  heading west to a possibly artificial mountain where intraterrestrials bombs would be tested. East roads communicate with the roads to give the 'Nameless Twon'. 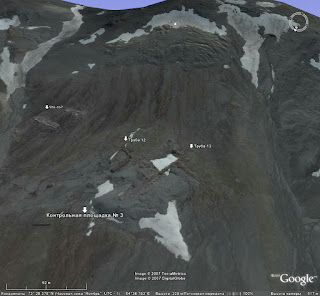 6 Routes and roads of the test area to Facilities on the beach, inside the channel 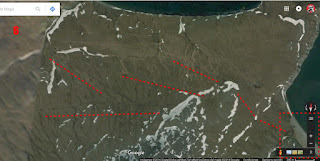 7  'Nameless Twon' in the center of the Matochkin Char channel, south side. We can distinguish a port and fuel tanks. We calculate for its capacity of several girdles of people and is certainly one of the new buildings announced by the Kremlim for 2020. 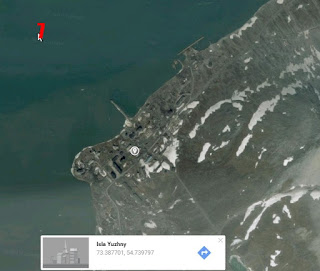 Detail of the port and a fuel tank 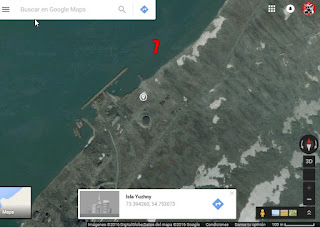 Roads out of the 'Nameless Town' south side of the channel, in what could be test sites, silos or nuclear waste dumps. 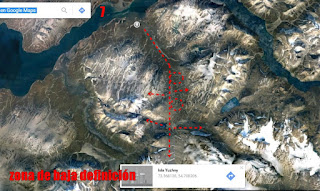 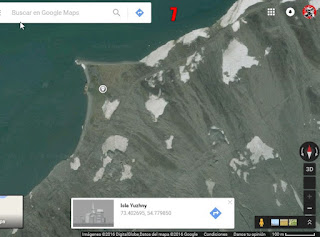 8- Building at the Cape that could form a system of radio beacons or antena. 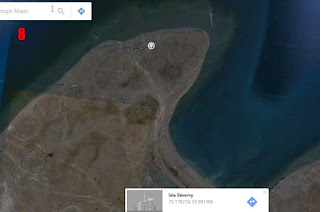 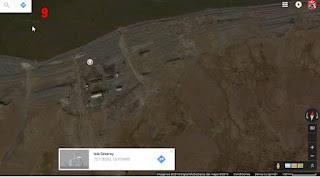 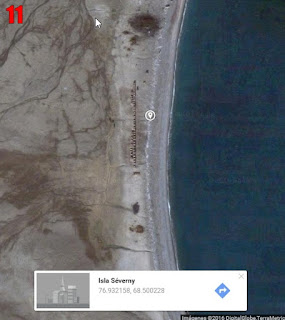 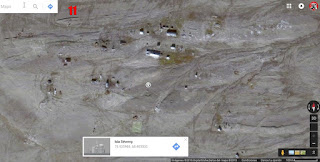 12 Town not found. It is shown in some guides 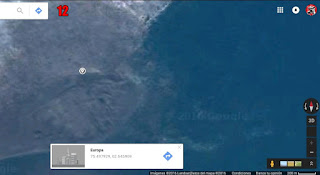 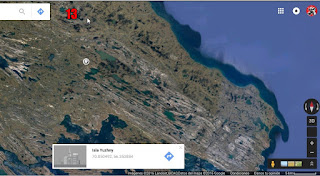 14 West Entrance to th Channel throught Matochkin Char and Litke. We have not found traces of population or any construction, although they should be placed as per strategy. 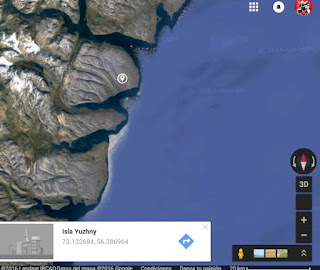 15 Malyya y Karmakouly- despite be clearly placed on maps we do not find its localization in the coast at north of Rogachevo. 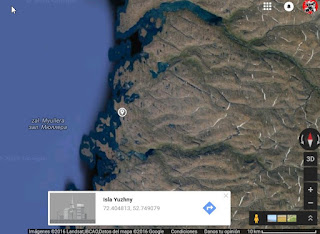 What are you dicksucking dipshits going to do about the island? You're not a match for the Russian Army. You're just a bunch of faggot wannabe-activists, sucking each others dicks in the basement.

I did spect nothing better to said from somo white trash redneck of your kind. You just mistake speak with spit. I'm so sorry for you
Health!