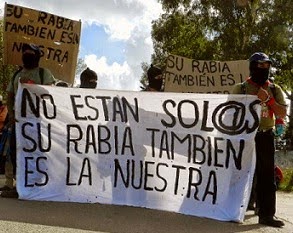 The bloody state repression against the Normal School Rural "Raúl Isidro Burgos" students in Ayotzinapa, Guerrero, 26th and 27th September 2014, murdered 6 companions, and 20 wounded 43 students missing. The killers were the Borought, State and Federal polices, supported by the Mexican Army. All three, Boruoght, State and Federal governments have conspired to carry out and cover up the infamous State crime.

Our hearts are sore, it hurts the deaths of our brothers. It hurts the absence and forced disappearance of our peers. We grieve the pain of the relatives, classmates and teachers from the Normal Rural Schoorl "Raúl Isidro Burgos" of Ayotzinapa, Guerrero.

We are outraged and rebels against the pain, death and the forced disappearance of our Ayotzinapan brothers.

Fellow Rural Normal School "Raúl Isidro Burgos" their pain is our pain, their rebellion is our rebellion. We embrace as embraces a brother in arms.

Living were taken, alive we want them back!

And what is an UNREAL DECEPTION is the political and economic Power meeting at the Campoamor Theatre on 24th October under the umbrella of the successor of Franco monarchy to surrender him homage while holding, pushing and enriched with Neoliberal policies. Impoverish, repress us and kidnaping concepts such as DEMOCRACY.

Rally bigger each year. No place to hide for white collar villians.


WE DO NOT WANT TO LIVE UNDER THE ILOGIC OF GREAT CAPITAL INHUMAN EXPLOITATION! 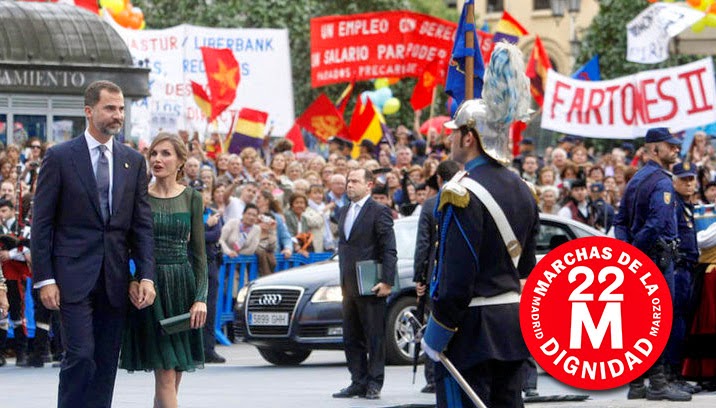 We want to BOOST THE SOCIAL CHANGE based on social justice and redistribution of wealth!

WE ARE REAL Campaing aims to promote and contribute the 24th October mobilization  overflow the frame itself of the mere protest, surrounding and ridiculing the stale and elitist "dandruff caste" entrenched in Campoamor Theatre.

NO TO UNEMPLOYMENT, NO TO DEBT, BASIC WAGE AND PUBLIC SERVICES! WE KEEP ON BOOSTING THE SOCIAL CHANGE!

Dignity Marchs have called which is expected to be a mass mobilization in Oviedo next October 24 to coincide with the delivery of the Prince of Asturias awards. Collective from las Cuencas, Siero, Gijon, Avilés and Grado converge in the Capital of the Principade to public protest and visible around the Teatro Campoamor.

The concentration is part of the campaign We are Real driven by the 22M Marches Dignity Assemblies. The organizers, who officially presented on Wednesday the initiative, and have the support of groups from other regions who have confirmed their presence in Asturias on the day of delivery of the Prince awards.

We are Reales is not only reduced to a protest on the day of the award ceremony. During the previous week, the organization plans to develop various debates on the issues, in his opinion, most concerned citizens. 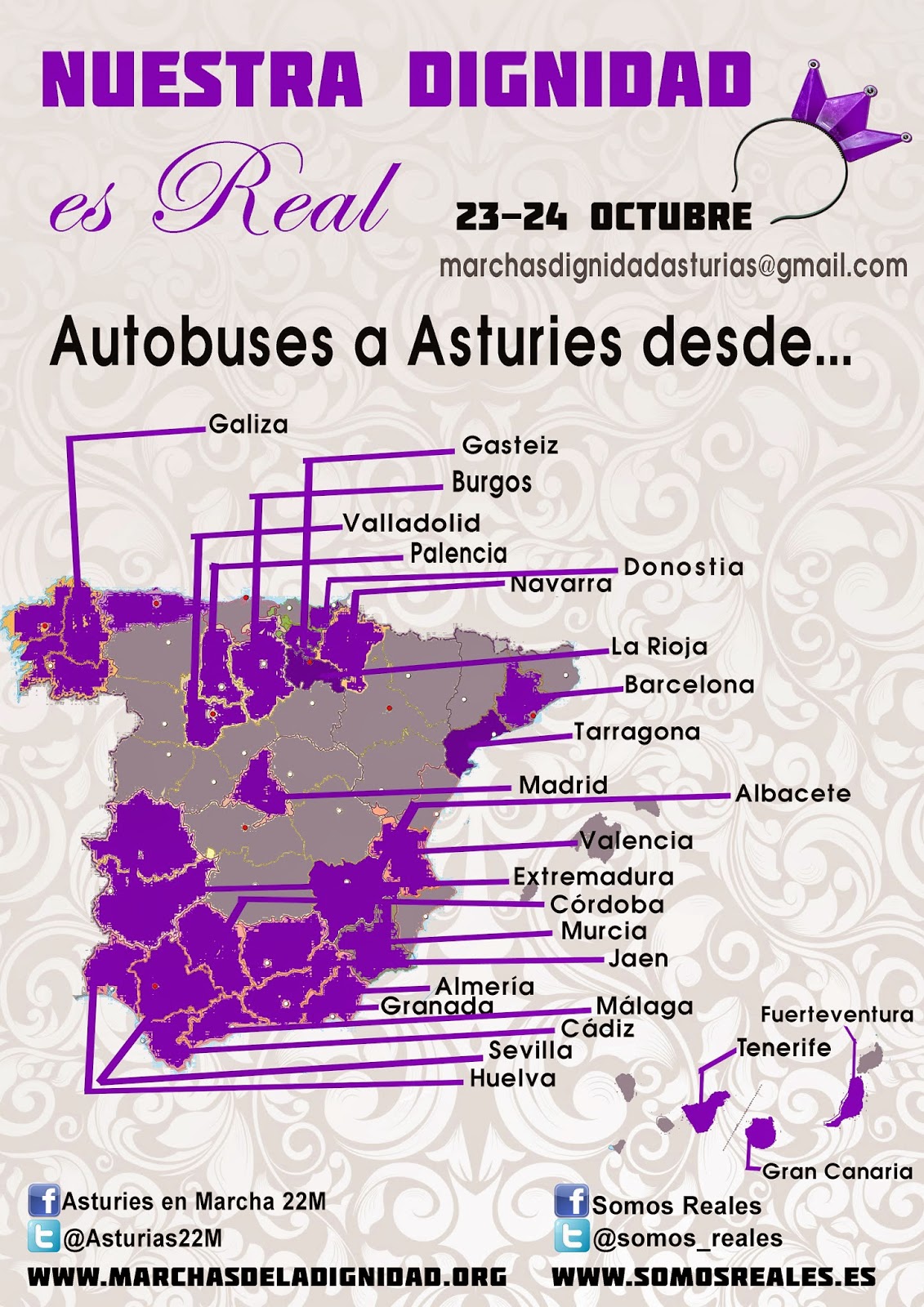 The collective 22M recalls that during recent years, has done a protest rally in the Square Escandalera in Oviedo coinciding with the ceremony of the Prince of Asturias Awards.


"We protest against the cuts, layoffs, business closures, evictions ... and against waste and institutional farce that involves organizing the gala as a mechanism for legitimization of the monarchy," say the organizers.

With the launch of the campaign We Are Real marches dignity join this protest and seek to promote a "mass mobilization and discussion of great social significance" to make visible the "real problems of social majority, its consequences and possible solutions. "

The assembly of the Dignity Marchs highlight that brings together representatives of the economic and political powers "that promote or support the neoliberal measures that have ended up impoverishing the population" in the ceremony of awards. Unemployment, precariousness, evictions, deprivation and cuts to public services such as education and health, the reduction of freedoms, racism, gender inequality, illegitimate debt, social injustice ... are just some of the problems denouncing the collective.


"The powers that have driven these neoliberal policies coalesce under the umbrella of the '78 monarchical regime. They do -continúan Saying convocantes- "to legitimize all together before the people, so they used to reward social tagging personalities far from their real social elite and opulence objectives."

WE ARE REAL Planning

Asturias begin on 20th actions and Forum conversations by locations.

Day 23 Afternoon receive you come to other territories.

Day 24 Early in the morning breakfast and depart of columns walking towards Oviedo (about 17 miles per column) where we arrive at lunch. The columns will come from Avilés, Gijón, Mieres, Oviedo, Pola Siero ...


14:30 Reception of the columns in the Paseo de los Alamos, Oviedo
14:30 Lunch OUR HUNGER IS REAL in Oviedo (if weather permits in the San Francisco park)

17:00 H. Rally as close as we can to the Campoamor Theatre, where meets all the bastards that are leading us to misery.

Day 25 Breakfast and return to the territories.

Will set lodges and companions houses for those who can not sleep in sport centers but please report it previusly pto know where to place each one.

After a month and three days of fighting for a whole neighborhood, Tetouan distric reach to generate social pressure that permit expel out the neo-Nazi group who had occupied a building in the heart of the neighborhood known as "the Social Home". Must be clear that without the peoples pressure, that xenophobic group linked to far-right parties, would still be there. We believe that was a victory against fascism and racism. 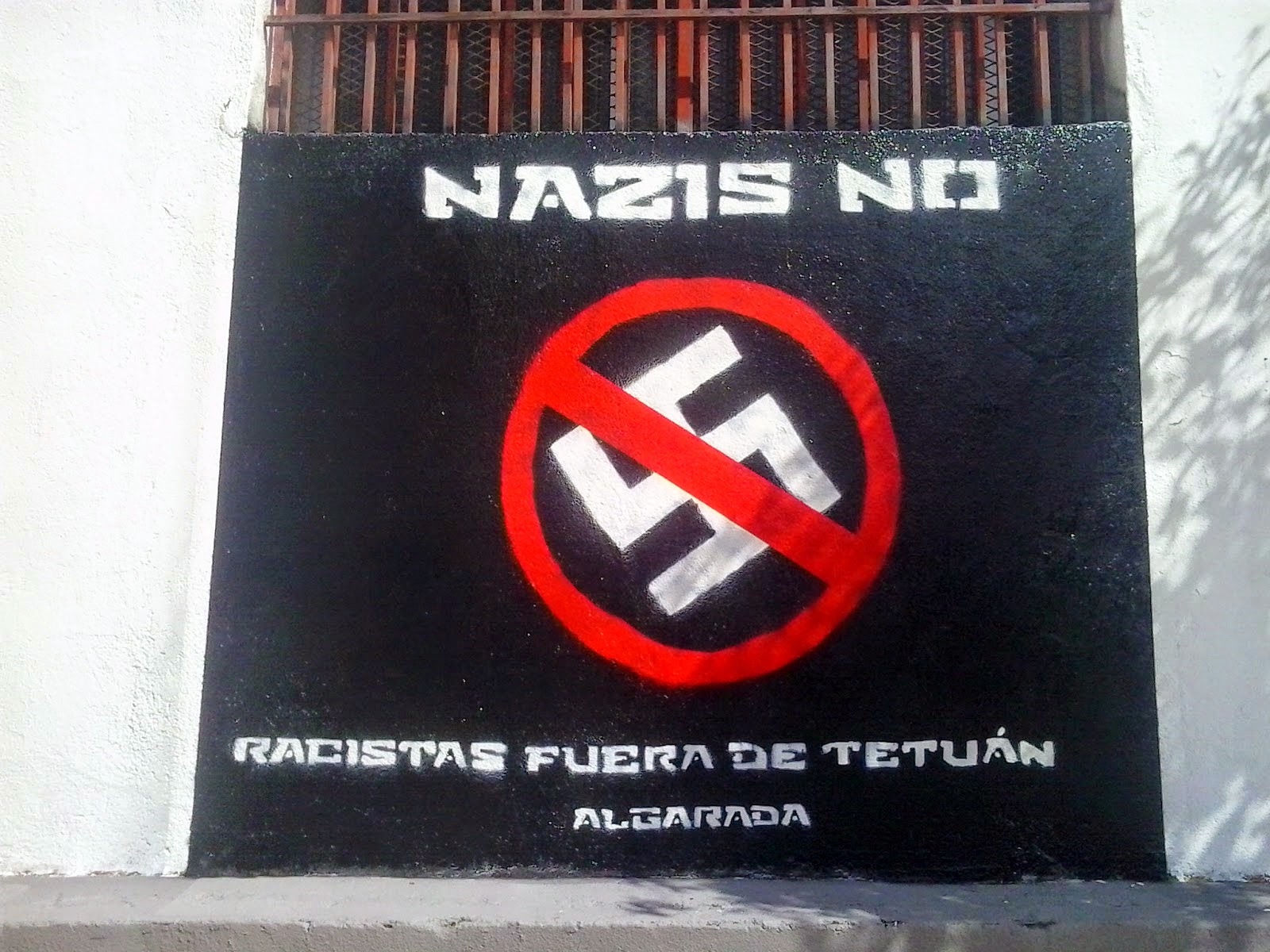 Said that, from Algarada ["Popular  Riot" antifascist group] want to notice that we are proud of what happened during this month of Solidarity between Tetouan neighbors [Barrio de Tetuán] and other districts of Madrid, and the anti-fascist and anti-racist struggle that has developed. But, as antifascists, we can not stake there and boast after this, we must continue to fight every day against these violent and racist elements that have no place in our neighborhoods, and those who continue to fight every day as we were doing before. Fascism, racism and Nazism, are still there and are a great danger if we do not fight to their end. 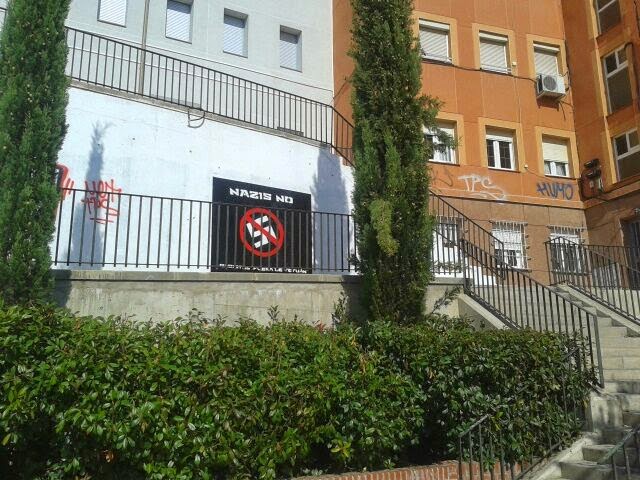 Without organization, to reject these Nazi-fascist elements of our neighborhood would have been much more difficult, if not impossible, so we consider essential for every neighborhood to set an Coordination, in case of fact as in Teotouan happen again, to give a overwelhim, quick and organized response, cutting short the problem.

Therefore, we say and state loud and clear:


RACIST OUT OF OUR NEIGHBORHOODS
TETUÁN ANTIFASCIST

Canary Anarchist Federation, Victoria!: "Only by Mutual Support People can get what they need"

"Evictions can be stop when there is a real intention to do it. Only mutual support and direct action, not promises made by parties in campaign, enable the people to get what we need."

This is one of the conclusions, as the Gran Canaria Anarchist Federation FAGC, Spain, that can be extracted from the action taken by a anti-evictions picket last Friday. Could postpone the eviction of a father and his son-Ignacio and Manuel - from their home -workshop in the popular neighborhood of Gran Canaria, Guanarteme.


"The Federation - explain libertarians - was calling  calling to picket for a week to prevent eviction, and dozens of neighbors and residents of the"La Esperanza Community"rode in several vehicles, a lot of miles to move up Guanarteme where was scheduled to happend"

"When we got to the place - continue to expose - the assembled forces were few. A majority were comrades from La Tomatera [Social Centre] and a minority of the 15-M Guanarteme Assembly [occupy] and the the Unemployed Assembly, while the rest were relatives of the affected, independent activists and some neighbors and curious."

Anarchists stand, finally, half of those gathered on the picket line were members of that community "La Esperanza", formed by a group of needy families, in February 2013, they were relocated by the Federation in a few blocks abandoned have been enabled to make in your home.

A particular circumstance considered "creditable", because it is people who, in most cases, participating for the first time in one of these pickets.


"We highlight that people with no other ideology but mutual support went to confront abuse with no more goal than to do the right thing and prevent a family lost their home as had happened to them, since most of the residents of the Community have been evicted in the past. "

"THE ARRIVAL OF ACRATS FELLOWS WITH MORE EXPERIENCE FORTIFIED POSITIONS"

The Anarchist Federation points out, however, that the arrival of anarchists comrades with more experienced stopping evictions fortified the stand. 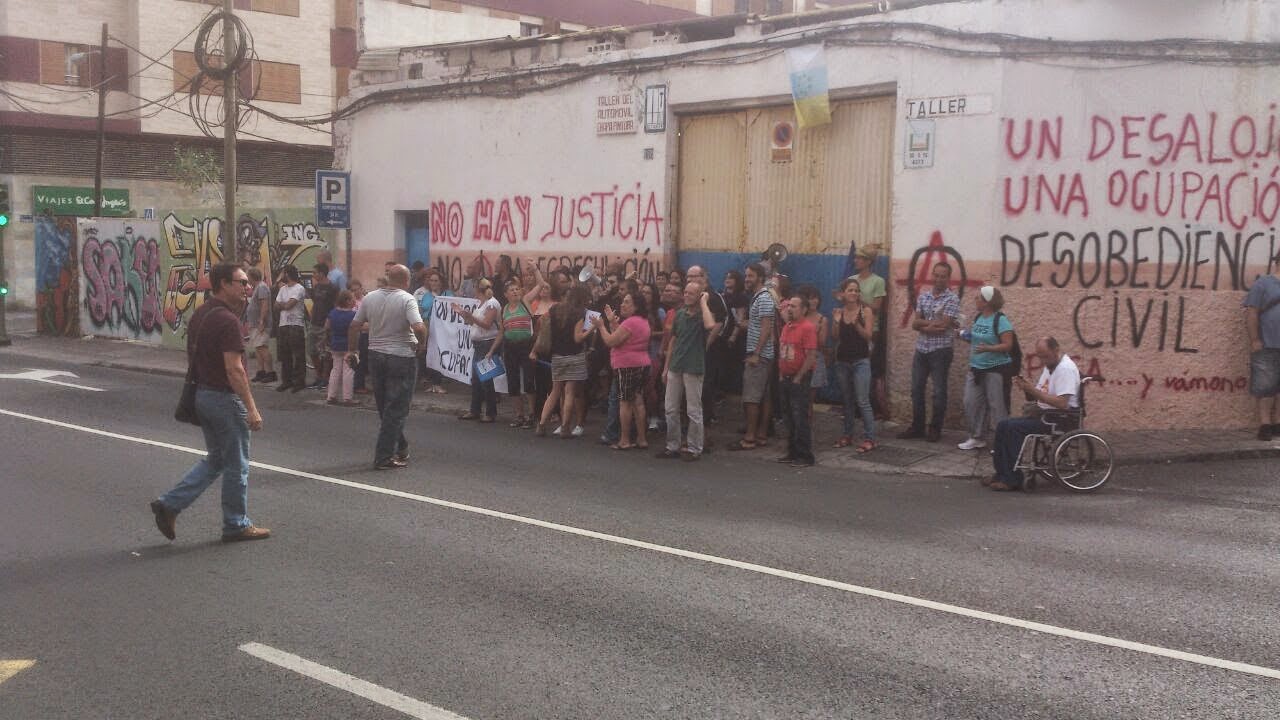 "They recommended closing the doors of the workshop as soon as possible and rally on the sidewalk where the property was located, deploy between the two possible entries, giving strategic and legal advice in case of detention, etc. The idea was to build a wall of meat that prevented police and judicial intervention. "

"At the time, -explican -. Appeared judicial commission that was soon repelled by the gathered. After this skirmish, which showed the police that his speech was inadvisable, the picket stood firm, without the fake withdrawal of Local Police and the commission offered us no reason to trust. One of the factors that made us remain vigilant was the presence of three secret police (the Information brigade) easily identified by their inexperience and low capacity to spot."

"Past the hour, according to the closure of the courts approached - added - became clear that the eviction was going to be postponed (later learned that this is not a victory, it is only a truce). Time for Banca March acept to negotiate with Ignacio, if such entity does not want its public image deteriorate and have to undertake a second round even more tough and bitter. "

"THE POSTPONEMENT OF EVICTION REASSERT THE OLD ANALYSIS: MUTUAL SUPPORT WORKS"
Anyway, the Anarchist Federation also appreciates that the postponement of the eviction has ratified old analisys and allow to start new ones". "And not just us  but also to those involved in an action like this for the first time." For libertarians, these people could understand, in practice, that "by many political readings that attempt to do an eviction and by much desire for prominence there among some, anti-eviction picket must have, it seems obvious, a main goal: affected keeps home." [opposite to some antieviction pickets that just look for publicity with political purposes]
Similarly - added - "have learn:
- That as important as the number of attendants picketing is the attitude and strategy;
- That the collective that monopolize press attention participation in front of the house [looking for publicity], such as PAH, can quietly refrain from intervening in such pickets even though the evicter is a bank and not an individual;
- That will to stop an eviction outweighs any other consideration, and
- Sometimes, although not desirable, more than twenty people from the other end of the island can supply the low participation of the neighbors in the neighborhood. "


"Making a particular reading -holds- this eviction has also allowed many relocated in the Community" La Esperanza "be aware of their potential and that only direct Action and Mutual support, not campaign promises of the parties and their white brands [new political citizen parties], enable the people to get what they need. "

"We wish- conclude - that this month Ignacio could negotiate in their favor and impose its demands. If not, we will come back to Guanarteme. More and stronger...".