Spain: Nearly 200,000 families could lose their homes in the coming months 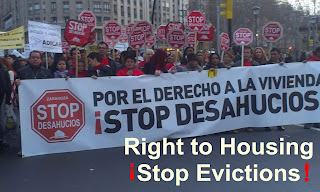 Acording to the europena politic spanish saving banks was one of the problem of crisis, so reestructuring them crisis pass. Goverment set the FROB, Orderly Bank Restructuring Fund, with UE money to start a chain of fusion to reder them all most competitive. As view the problem was not this saving bank so the general corruption across the country. Anyway plans of restructuration keeps on. As one of many consecuence all mortgages was check one by one.


As reported in the digital media "El Confidencia Digital" FROB,  has given the order to execute without delay the eviction lawsuits to court to get all information as soon as possible on real property to which output will have to give the future 'bad bank '. Yes, the FROB, the same organization that rescues banks with public money and serves as security for the EU to deliver 100,000 million euros for this purpose. To people, as you can see, they are not so "comprehensive". Kaosenlared September 2012.


Nearly 200,000 families could be without their homes in the coming weeks or months in Spain, according to a report presented by the Association of Users of Banking (Adicae).
At the end of 2012, were accounted for 198,111 pending foreclosure, that would bring as many evictions.
The figure has increased by 13% compared to 2011, as published by the newspaper ABC, keep in mind that nearly 250,000 families have lost their homes since 2008.
Every week, more evictions
The Banking Users Association, through its president, Manuel Pardos, asked, given the sirius of the situation, "not wait another day to take extraordinary measures such as the suspension of executions and liens by three-year moratorium. "
The drama continues evictions every month. In the fourth quarter of 2012 were approved in court evictions 24,310, 25% more than in the previous quarter.
http://ecodiario.eleconomista.es/sociedad/noticias/4697028/03/13/Casi-200000-familias-podrian-perder-su-vivienda-en-los-proximos-meses.html

Papa a la carte: Francesco I The Poor for Crisis age

The church adapts to times more than we think. So much that capitalist has Papa "a la carte". 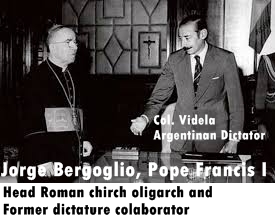 The anticomunist Pope
In the 80s with Pope Giovani Paolo II came from a Polish ghetto, had been communist guerrilla and proletarian, "son of his time". Oriented Christians to fit into the democratic capitalist cause and suppor   Lech Walesa's union Solidarity by fund and nourishing. Reneged "liberation theology" south-american church practices and. blessed banana republics trying desmantelate People Resistence.

The Pope of the rich
With Benedict XVI Church did not hide, the pope was a leader of the old school, a pro-Nazi with pederast brother surrounded by a magnificent retinue. Crises erupted. Sex scandals besetting his head visible. Vatileaks, business with the mafia, with real estate, with politicians. The Vatican Bank loans to businesses investing in weapons worldwide. But what really sank the Nazi pope was not these corruption cases, people have very little memory and could have been replaced. The global economic crisis began and started lose followers, people thought with the empty stomach. For crisis times the opulence of the Vatican was a slap to the faithful. The church would not tolerate, Ratzinger was not worth

The Pope of Infinite Crisis
The church, which has always based its power on ignorance and manipulating their followers, can not stay without renewing their appearance. Open an account on twitter but not enough. The Pope is their appearance.
The new measures of a pope in times of crisis are: poverty aura, and able to withstand the austerity. What better than a survivor of a dictatorship in Argentina. Voila: new slogan, << Do not be sad men or women ever: a Christian can never be >>. And to do that the 1,500 million Christians who they say is faithful happy to stay home and pray, and let God worry about their business.

As always the church is allied with power. Bergoglio, Frank I the folksy, henchman Videla's dictatorship, is tired of blessing warships and tanks, to attend weddings, baptisms and communions of military, bury with honors the murderers of his people in the name of the capital. "I want a church for the poor poorer."

Drop the mask, the church will be renewed and will continue to lose followers. The people know their tricks and know how to end them: knowledge and solidarity against dogmatism and property. They are hosts and we reason. And so, as at this point in history, a country can not start a war without raising all kinds of reactions against, will came the day that likewise would sustain no lies.