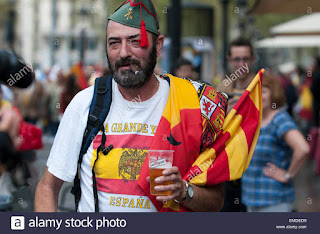 His sense of tolerance and respect for other ideas is demonstrated in these images of the Plaza de Sant Jaume, in front of the Generalitat building, where we see people demonstrating with Spanish flags in the middle of the celebration of independence, without any incident or confrontation.
Instead, in the Spanish unionist movement, we have seen signs of FASCISM and VIOLENCE against those who think differently, AS ALWAYS.

The violent attitudes and aggressions shown below, on the part of radical and violent Spanish ultranationalists in Catalonia, have not been condemned by any Spanish political party and have been ignored in the majority of Spanish media. It’s the usual complicit silence about fascist practices in the Spanish Regime.
The Spanish ultranationalist aggressions have been the ONLY CASES OF VIOLENCE in Catalonia, both before and after the proclamation of the Catalan Republic.
Fascists have attacked schools, the media and people on the streets. This is their concept of ‘democracy’.
At least five people were injured on Friday night during the unionist demonstration that took place in the streets of Barcelona. Two of the injured have been teachers at CIC High School, and the third, a man in a bar. The other two injured, have been young people at Paseo de Gracia.
Protesters have stopped at the gates of the CIC school and insulted the people in the centre. At times, they have even faced students, the majority of whom are minors. Inside the school, there have been moments of fear. Later, the school has confirmed that two teachers have been assaulted, but that the students have not been harmed.
Here you can see the FASCISTS attacking the school. Why? Because this school had a banner saying “Democracy”
This is happening in 21st century Europe, with the support of the governments of the European Union: attacks on schools and attacks on teachers, attacks on media, to think differently, in the purest NAZI style.
Simply put, FASCIST PRACTICES.
In their infinite cynicism, these fascists say that “they are going to defend democracy”. Can you believe it?
Their “democracy” is based on aggression against the people who does not think like them.
These same radical ultranationalists have organized marches of support for the police who repressed and savagely assaulted the people who voted in the October 1 referendum. In other words, they applaud repression and violence against those who think differently. This is FASCISM.
Another man was injured on Mallorca Street in Barcelona, when a group of Spanish ultra-nationalists attacked people outside a bar. A man with a balaclava has punched another man on the nose who was shouting “freedom”. The man has fallen to the ground and, with help, has entered the bar with his nose bleeding”.
Two other people had to be admitted to the Sant Pau hospital for minor contusions.
In addition, violent mobs have also attacked the installations of Catalunya Radio, the Catalan public radio station, because this medium does not repeat the lies and manipulations of the Spanish Regime and, for example, does not hide or justify FASCIST aggressions, as the Spanish media do.
The violent mob also attacked journalists of the Betevé de Barcelona municipal channel.
The attacks have been repeated again on 29 October, following the demonstration for the unit of Spain organized by the entity called Sociedad Civil Catalana (SCC), known as the Catalan Civil Society (SCC) for their fascist ties.
Representatives of all the political parties of the Regime have been present (right wing PP and Ciudadanos, even the socialists of the PSOE-PSC), all of them ignoring the fascist ties of the convening entity.
After the demonstration, there have been numerous attacks by ultra-Spanish nationalists and, as usual, the Spanish media have hidden it from Spanish public opinion.
A taxi driver was attacked with a beer. He ended up with an eyebrow injury and was transferred to the Hospital Sant Pau. The images show his bloodstained shirt.

http://www.elnacional.cat/es/politica/agresion-taxista-manifestacion-unionista_207255_102.html
The Spanish fascists have also attacked many other people, such as a worker of the Catalan Railways, at Barcelona’s Provença station.

http://www.elnacional.cat/es/politica/manifestacion-agreden-trabajadora-fgc_207234_102.html
There have also been attacks against the Catalan media.
Some protesters have thrown coins, lit cigarettes and spittle at journalists of catalan television TV3.
https://t.co/TKUe63OEEX

http://www.elnacional.cat/es/politica/monedas-cigarrillos-escupitajos-periodistas-tv3_207222_102.html
An attendee at the unionist demonstration attacked a journalist from another Catalan media outlet, El Nacional, on the Paseo de Gràcia in Barcelona while he was doing his job and filming those attending the demonstration. The events have taken place in the press area.

The FASCISTS have also attacked the Catalan police, the Mossos d’ Esquadra in the Plaza de Sant Jaume and other people who were there.
The ultras shouted slogans in support of the fascist dictator, Francisco Franco.
As you can see, this is the meaning of the “for the unity of Spain”demonstrations that are taking place in Barcelona these last few weeks.
Assaults, insults, violence.
NAZISM AND FASCISM.
And after seeing all these aggressions, the President of the Spanish Government, Mariano Rajoy, congratulated these violent and FASCIST demonstrators for their attitude with a tweet in which he speaks of “coexistence” and “concord”.
All this with the support of the governments of the European Union.
This is the wonderful “Unity of Spain” offered to Catalans and its “concord and cohabitation”.
No wonder so many of them want to flee from such a profoundly sick country and intolerant.
Yes, this is what is happening in Catalonia, where fascist and neo-Nazi Spanish ultranationalist groups attack the Catalans who do not think like them.
Fascism and Nazism in 21st century Europe, with the support of the “democratic” governments of the European Union.
Why does the European Union support fascist violence and the repression of democracy?


European friends, if you tolerate this, you will be next.
Published by Pablo Heraklio en 8:07 No hay comentarios: