Anarchism after the First International 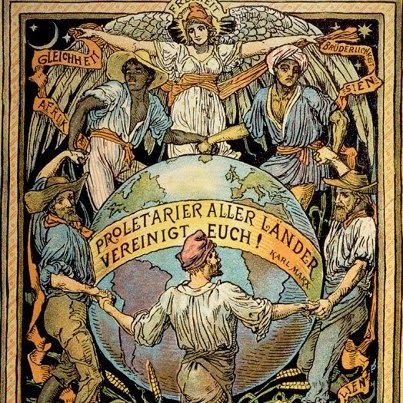 Expulsion of anarchists and dissolution of the 1st Interancional
After the break up within the First International, years will come in which anarchism as a mass movement will suffer a setback. However, still many notable publications and libertarian activities. But anarchism should understand that can not fall back on any doctrinal idea, and should try to influence social movements in promoting self-management in all areas of the life.

As seen, Bakunin's anarchism had its importance in the First International, but the split between authoritarian and antiauthoritarian was inevitable. Will be a country where the libertarian spirit of the First International came to life in the so-called Spanish Republic Workers Federation; thousands of workers organized adopted the collectivist doctrine of Bakunin. Moreover, the anarchist communism of Kropotkin was becoming a noticeable trend widespread in other European countries such as France, Italy, Switzerland, Belgium and England 1.

Relationship between Anarchism and Socialism. The 2nd International
However, in the rest of Europe around 1880, anarchism seemed to regress and social democracy prevail, covered in industrial development and the achievement of certain political rights. The parliamentary reformism, obviously, renounced to the social revolution and merely aspired to take over the bourgeois state and promote certain claims immediately. Meanwhile, anarchism retreated in the rightness of their ideas in small groups organized covert action, not necessarily violent, although it is sometimes encouraged. While some consider that these actions aroused the proletariat revolt, for example in France, his state of stupor, others saw the violence away from anarchism to workers parlamentarist 2 disappointed with socialism. Anarchism was a substance of truly revolutionary socialist party, so its retreat to isolated facts, sometimes appreciable and other vulgar, perhaps it is because in those years could see how the masses adopted the easy way, accepting the leadership in organizations and canceling and all revolutionary impulse.

The rupture in the socialist movement became increasingly irreconcilable: anarchism seemed to fall in the late nineteenth century in the violent action, while supporters of parliamentary intervention pathetically lost their revolutionary condition. Whatever think about anarchist violence of those years, most of the cases reactions against the cruelty of the system, have to be very critical of those who thought that was the only way to initiate social revolt. Unfortunately, these events were exploited by bourgeois society to mislead the public that this was all anarchists knew to do. Sadly, as was said by the historian of anarchism Max Nettlau, was the situation of isolation, that could not last many years as will run parallel to the flowering of the rich libertarian corpus resulted in three economic concepts arises: collectivism, communism and mutualism.

However there may be mentioned, despite this general situation, some important movements that fuse anarchism with socialist currents: in the France region of Lyon a movement supported by Kropotkin (1881-1882); an anti-parliamentary socialism in England, then become an ally of the anarchist ideas of William Morris (1879-1894); in Austria, a revolutionary socialist, anarchist, that influenced even the heirs of the Social Democratic Party (1880-1884); in the United States, an anarchist collectivism examples of Johann Most and Albert Parsons (1881-1886), as well as the Chicago martyrs executed at the end of 1887, or the movement of international reorganization initiated by Malatesta in Italy 1883 and 18843. Were movments that had to be of interest to members of other socialist currents and bring them closer to anarchist ideas. Unfortunately, it did not happen, partly because of government persecution, which ended with the aforementioned movements, and partly because of the attitude of many anarchist militants had withdrawn to isolated facts and doctrinal rigor somewhat oblivious to what should be anarchism.

Strengthened by the situation, the Social Democrats met in Paris in 1889 to resume the conference and prepare the ground for a Second International. While some anarchists still want to participate, they soon arrived conflict and two years later, at a conference in Brussels, libertarians were expelled without further contemplation. In the held in Zurich in 1893, the Social Democrats shielded against anarchist intervention in proposing that, for the future and outside of unions, would just be admit parties and associations that accept only the parliamentary action.

Rise of Anarchism: propaganda by deed, unionism, free schools, direct action, self-management
Anarchism, by its eminently social nature, could not be permanently lost in those isolated facts or in the least dogmatic temptation. Kropotkin, who at that time become one of the main theoretis, made a fierce criticism to mere "propaganda by deed" and asked retrieve the associative spirit of the First International. To unlink the working class from socialist parliamentary influence must remain militant anarchism in social movements. So that begins to germinate what would be the unionist side of anarchism. A militant Fernand Pelloutier, in a text of 1895, links the trade union with the future libertarian society; a "practical school of anarchism" to cancell all political power and governed by self-management. It will be seen by some as a return to its workers roots of anarchism trying to bring the masses by revolutionary way to teach the primary libertarian idea of direct action 4.

Of course, not all anarchists saw with good eyes this confident in the trade union action. In the International Anarchist Congress in 1907, Malatesta enter into controversy with supporters of trade unionism to warn of the dangers of reformism, the bureaucracy and the conversion of some militants in "permanent staff" and "union employees". Both sides had their reasons, first it seemed essential that anarchism participate in the labor movement. On the other, it was inconceivable that the union be enough by itself to transform society.

Whatever the case, the incipient revolutionary syndicalism that was born at that time was directed more against bourgeois democracy, and against all influence of an alienated proletarian class, than against an anarchism, that was seen economicly favorable self-management producers. During the years before the First World War, the revolutionary syndicalist French movement led to the General Workers Confederation, had great power and can be seen as the synthesis between anarchism and syndicalism (as of 1914 it'll be something else). The mature fruit of this synthesis, however, will be the Spanish National Workers Confederation, founded in 1910.