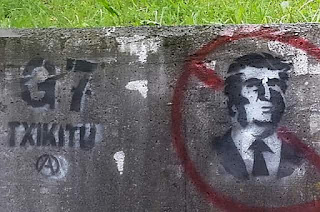 Anti-capitalist campaigners are gathering for discussions and workshops in the southwestern coastal French city of Hendaye amid high security ahead of the G7 summit this weekend.
It is France's turn to host the annual G7 summit as French president Emmanuel Macron takes over chairmanship of the group dubbed "seven richest nations". They include Britain, Canada, France, Germany, Italy, Japan and the United States.
The Summit's theme this year is 'fighting inequality', particularly in education.
But anti-capitalist campigners doubt the intentions of G7 countries.
Alternative G7Before the world leaders meet in Biarritz for the summit starting on Saturday, thousands of anti-capitalist activists are gathering in Hendaye, located on the Spanish border.
There will be discussions and workshops promoting ecological, anti-racist and anti-colonial solutions to the world's problems.
"We are not just saying we are against capitalism, we want to show people there are alternatives," explains Arturo Villanueva, a spokesperson for 'Alternative G7', a collective of anti-capitalist NGOs.
The Basque region of France has long been associated with resistance associated with the unique language and culture of the people.In recent decades an alternative economies have been created, including the Eusko currency and a renewable energy network.
Call for Saturday demonstrationWhen the discussions and workshops draw to a close, Alternative G7 will hold a demonstration on Saturday 24 August calling on world leaders to tackle inequality.
It is a call likely to resonate with the Yellow Vest movement that took Emmanuel's government by surprise here in France.
Both the Alternative G7 and the security service are hoping that Saturday's march will remain peaceful. "Our main weapon in the war on neo-liberal capitalism is peaceful demonstrations," says Villanueva.
Security fears over Black BlocsDespite these intentions, fifteen thousand extra police and soldiers have been drafted in to secure the three-day summit that has a history of provoking anti-capitalist demonstrations.
Authorities are projecting that 400 arrests will be made daily.
The fear is that Yellow Vest protestors may resort to violence, and that Black Bloc anarchists will take advantage of mayhem as they have on several occasions in recent months.
Four men and a woman were arrested in two French towns on Tuesday on suspicion of planning a riot in Biarritz this weekend.
Local businesses annoyedMeanwhile, local shopkeepers in Biarritz are up in arms over the extra security measures.
"We were not consulted about whether or not we wanted the G7 summit to be held here. It has been imposed on us," complains Serge Istèque, head of the Biarritz Shopkeepers Association. 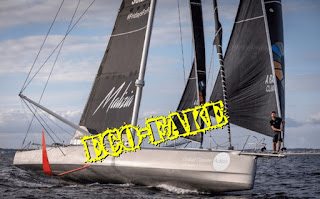