Despite it could be an hoax for the spanish audience it is not. When "La Mañana" RTVE program was give the information about the attacks on the claimed capital of DAESH Raqqa they give as good the connetion of theAl-qaeda, DAESH and the Galactic Rebel Allianz. 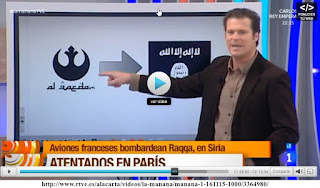 Hilarious if there were not lives and people suffering.

This is not the first time spanish public televisión gives weird, unconfirmed, censored or manipulated information.
"Las Mañanas de la 1" mitakes the new Star Wars trailer with bombing images of France in Syria
The incident adds up to a chain of stupidity in the SPANISH MEDIA 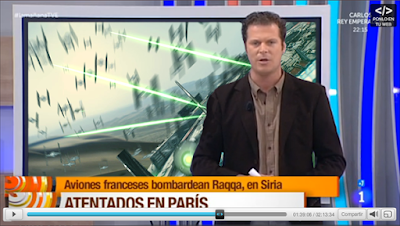 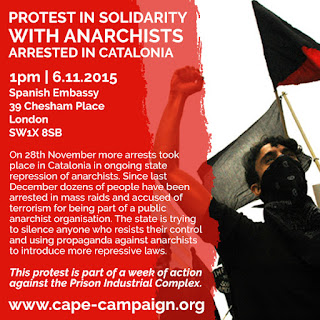 22 October 2015, 7 anarchist comrades arrested in Barcelona, 2 in Manresa. 8 houses and social centers in the neighborhoods of Sant Andreu, Clot, Gràcia, and Sants raided, including the Ateneu Llibertàri de Sants and La Revoltosa in Clot. They will be taken to Madrid where it will be decided in the next days if they are to be released or imprisoned pending trial. The operation takes place the day after Monica and Francisco were brought before the Audiencia Nacional in Madrid, to decide whether they would be given an additional two years of preventive detention under the anti-terrorist law (the two comrades, who were also imprisoned and absolved in Chile in the so-called “Bombs Case” were arrested in Barcelona in November 2013).

Translated from Catalan
http://www.bllibertari.org/un-company-i-amic-detingut-a-manresa.html
22 October 2015
This morning, starting at 5am, there were raids in two houses in Manresa and two people were arrested on the orders of the Audiencia Nacional, acting against anarchist struggles. Units of the mobile brigade of the Mossos d’Esquadra also carried out raids and arrests in various houses and social centers in Barcelona. As per usual, units from the Information Brigade seized materials, including electronic equipment, money, and propaganda. This operation is a continuation of the repressive strike known as the Pandora case, which was carried out in December of 2014 with the arrest of 11 comrades who are currently awaiting trial, and is related to Operation Piñata and Operation Columna, realized by the Policia Nacional.
This new repressive blow coincides with the hearing in the Audiencia Nacional to revisit the decision of preventive detention for the two imprisoned comrades, Monica and Francisco. We understand these arrests as a police and mediatic effort to facilitate the prolongation of the imprisonment of the two comrades, who have already been locked up for two years in preventive. This very day the high court confirmed the prolongation of their preventive detention. The principal objective of the State is to crush the anarchist struggles that it has singled out as the number one internal enemy. We understand that the figure of an internal enemy is necessary for a democratic State to justify “exceptional” methods of repression that supposedly should not exist in a society of “rights and liberties.”
Once again, we must signal the collaboration of the Audiencia Nacional [high court in Madrid] with the repressive forces of the Generalitat [the autonomous government of Catalunya], the Mossos d’Esquadra. Equally, the role of the media continues to give credibility to police sources and focus the case on the figure of the GAC, a public organization that in the police and media imagination has become a terrorist association.
In order to confront the repression and overcome the fear the State wishes to sow, we call for the following protests:
Photos of solidarity banners
http://barcelona.indymedia.org/newswire/display/499948/index.php
Solidarity website
efectopandora.wordpress.com
Published by Pablo Heraklio en 12:49 2 comentarios: