'5-stars' anarchist in Pall Mall are the Queen's new neighbours 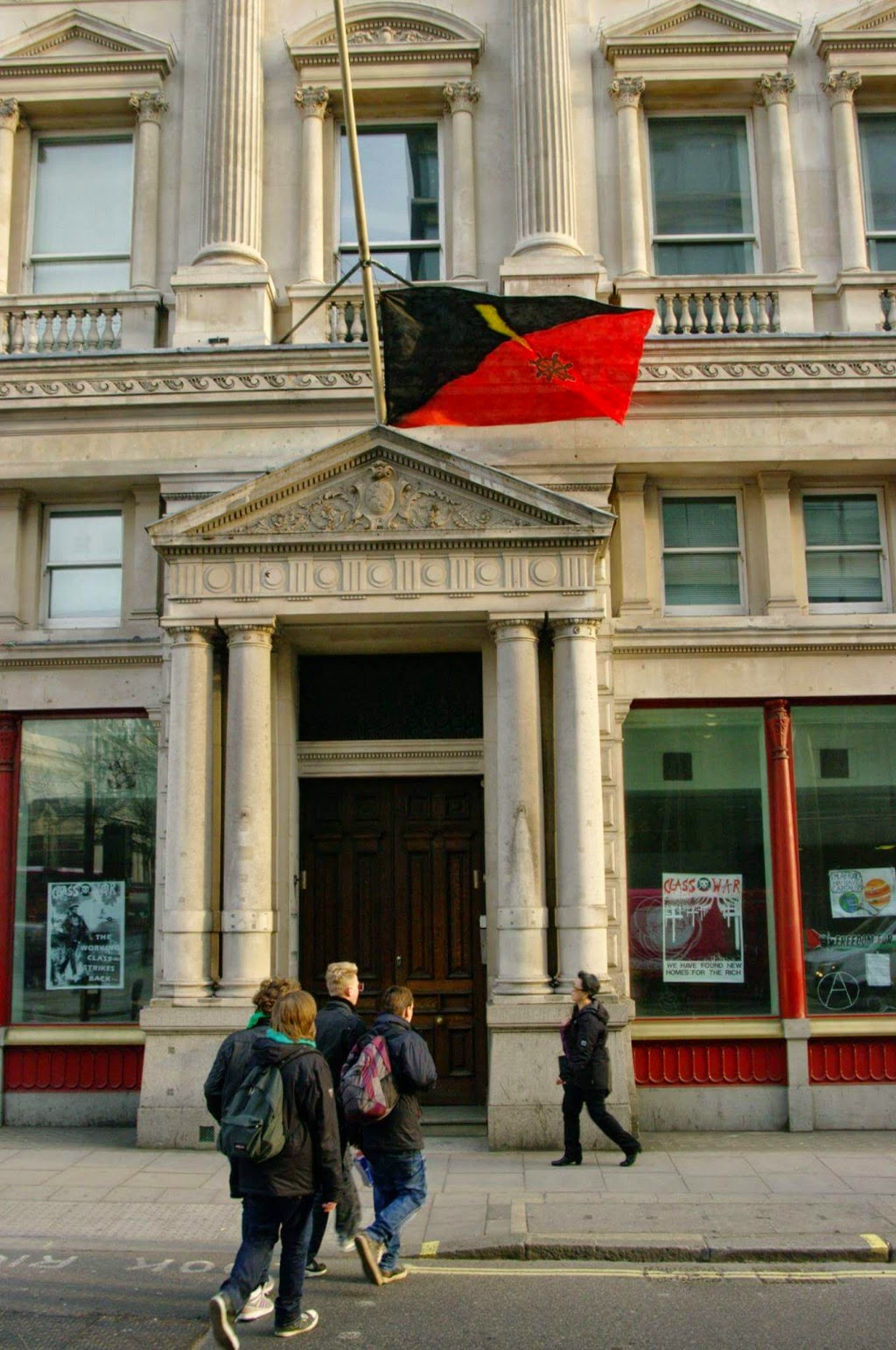 Horror arrives at London Evening Standar by the pen of Matt Watts, supposedly periodist, posh and naive pawn, for whose neoliberal mind is difficult to understand the meaning of gertrification and class struggle.

<< A group of "five stars squatters" has taken over a historic office block yards from Buckinhan Palace. Activist who have entered the former HQ of the Institute of  Directors at 123 Pall Mall today vowed to stay "as long as they can". The six-storey, multimillion-pound office block is 700 yards from Buckinham Palace. The squatters moved in last week and have renamed it as the Instutute of Dissidents.

<<At least 40 squatters are hosting workshop, film screenings and soup kitchen for homeless in the "radical space".
He said he speak with a member of the Autonomous Nation of Anarchist and Libertarians ant the activists


"Enjoyed living the luxurious, five-star conditions" as if they were as superficial as him.
"We are not just lesfties and hippies, we are very much upmarket squatters now too" with irony.
"The building was empty so why can't we use it? We are respecting the interior. There will be no graffiti, no drug taking".
"We want to make an statemet that building worrth millions of pounds are not standing empty the hearth of this city where people cannot afford to live and people are desesterate for housing".

<<A red and black flag has been hoisted on a pole outside, and the front is draped with banners proclaming "anti-capitalista" intent.
The activist has used their occupation to launch an attack to the Institute of Directors, claiming it is intersted "only in the needs of the rich".

Designed by scottish archited Alexander Peebles, and built in the 1880 with the money from the explotation of the old colonies. A boring building wich only remarkable feature is "big". The Institute wich representes company directors, handed back the lease on the building and left it last year after an expansion at their new headquarters down road, next to the epicenter of corruption, the City.

He also speaks about an spokesman:


"we vacated this building  six months ago, but there is a chace there are some old Frederick Hayek or Adams Smith books left behinf so they can learn how to rob as we do" .

It is well known that behind the face of a politician lies the logo of a corporation. For this reason that the Autonomous Nation of Anarchist Libertarians (A.N.A.L.) and Squatter and Homeless Autonomy (S.H.A.) have occupied 123 Pall Mall, which was formerly the Institute of Directors.

The Institute, now a few buildings down the road, functions as a lobby group for business leaders and CEO’s who wish to “exercise influence in all areas of social and economic policy”. Zero-hour contracts, lower taxes in such a way that inevitably benefits the wealthy, and the erasure of workers’ rights are at the centre of the Institutes monetarist ideology. Their website states it plainly.

The building has been renamed the Institute of Dissidents. Dissidents are squatters, rioters, grass-roots journalists, community activists. In our age of mass exploitation and state violence, dissidents are those who resist the hierarchy summarised so crudely by this building’s previous owners.

A.N.A.L and S.H.A have opened the building as a radical space used to network anti-capitalist groups and individuals. In particular, we will host Know Your Rights, internet security and squatting workshops, screen the green anarchist documentary EndCiv, and use the cooking facilities in the building for the benefit of local street homeless people.

In their work ‘An Introduction to Civil War’, the radical collective Tiqqun revokes the lie of government. The State does not mean order, but the continuation of civil war: the rich are waging war against the poor, fascists against immigrant and black communities, PCSOs and their byelaws against squatters and other homeless people.

The opening up of squats and other autonomous zones, such as this at 123 Pall Mall, blows a strike in favour of the oppressed. A.N.A.L. and S.H.A welcome you to the Institute of Dissidents.

Hurray! for the Institute of Dissenters!