Mass Sterilization of Millions of African Girls through Tetanus Vaccine

According to a growing number of reports, Agriq-Quest Ltd, the Nairobi based testing laboratory appointed by the Kenyan Ministry of Health and the Catholic Health Commission to carry out analysis on selected vials of the tetanus toxoid vaccines to determine whether or not they contained the anti-fertility hormone hCG, have had their license suspended.
Interestingly, the allegation that their license was suspended came a full two years after they had presented their findings, and representatives from the laboratory have told Health Impact News that their license is still intact.

In 2014, doctors from the Kenyan Catholic Doctors Association discovered that the tetanus vaccinations that had been administered to 2.3 million girls and women by the World Health Organization and UNICEF had been contaminated with the anti-fertility hormone hCG.
Human chorionic gonadotropin, or hCG, is a hormone produced naturally in pregnancy to encourage the development of the growing fetus. However, when hCG is combined with the tetanus toxoid carrier in tetanus vaccinations, it causes a pregnant woman to produce antibodies against the pregnancy and leads her to miscarry.
In September of 2017 APA News in Kenya reported that at least 500,000 young girls and women may be infertile, following a tetanus vaccine administered by the government in 2014 and 2015:

“Today, we can confirm to the country that the Catholic Church was right. Hundreds of thousands of our girls and women, aged between 14 and 49, from the fastest growing populations in the country will not have children, because of the state-sponsored sterilization that was sold to the country as tetanus vaccination,” Odinga declared.

Odinga further charged that they accessed the analysis from four highly-regarded institutions, such as AgriQ Quest Ltd, the Nairobi Hospital Laboratories, the University of Nairobi and Lancet Kenya.

Business Daily Africa reported that the laboratory testing the vaccines has lost its license:

An industrial laboratory that was embroiled in controversy with the government last year has had its licence suspended.
The Kenya Accreditation Service (Kenas) announced that it suspended Agriq-Quest Ltd’s licence this month.
The Nairobi-based company came into the limelight mid last year in a dispute with the Ministry of Health over a controversial tetanus and polio vaccination.

“Kenya’s opposition leader Raila Odinga said girls and women aged between 14 and 49 from the fastest growing populations in the country will not have children, because of a state-sponsored sterilization exercise that was sold to the country as a tetanus vaccination.
The Catholic Church was ignored when it mounted a strong but lonely campaign against the mass tetanus vaccination, after it raised concerns about the safety of the vaccine that was being used, he said.
At the time, the Catholic Church in Kenya claimed that the tetanus vaccine used by the government of Kenya and UN agencies was contaminated with a hormone (hCG) that can cause miscarriages and render some women sterile.”

The Agence de Presse Africaine stated that Odring confirmed the vaccines were contaminated with the hCG hormone:

“Today, we can confirm to the country that the Catholic Church was right. Hundreds of thousands of our girls and women, aged between 14 and 49, from the fastest growing populations in the country will not have children, because of the state-sponsored sterilization that was sold to the country as tetanus vaccination.”

A further report published by Business Daily Africa, stated that when their reporters had spoken to the CEO of Agriq-Quest Ltd, Mr. Fredrick Muthuri, on the telephone, he informed them that that his company was in dispute over the suspension, due to “foul play.”
However, they followed up with this statement by adding that a former employee of the company, who wished to remain anonymous, had stated that:

“The lab lacked capacity to carry out the tests it was handling for its clients, including the Ministry of Health and several industries such as Tullow Oil Plc and purified drinking water manufacturers.”

According to Agriq-Quest Ltd, they presented the results of their findings in January 2015. Their presentation to the Joint Committee of experts, confirmed categorically that the vaccinations tested did contain the anti-fertility hormone, hCG.
If this is correct, then it would mean that the Kenyan Ministry of Health knew that the tested vaccinations contained hCG, two years before Agriq-Quest had their license suspended. 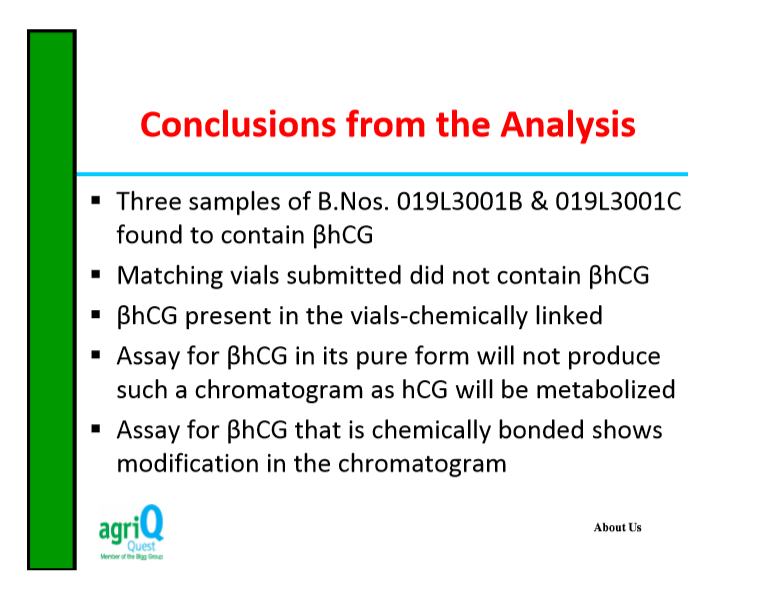 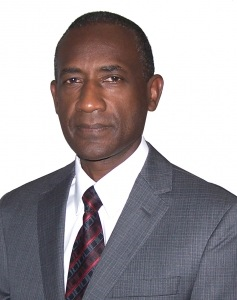 Dr. Ngare.
We asked Dr. Wahome Ngare from the Kenyan Catholic Association whether or not he could verify that the Kenyan Ministry of Health knew that vaccinations were contaminated two years before their license was suspended. He stated:

“This is correct. However, the then-principal secretary of the Ministry of Health, Dr. Muraguri, who had constituted the joint committee of experts, immediately cast doubt on our results and even suggested that we may have deliberately contaminated the vaccines with hCG, which is ridiculous.
The results showed that the hCG in the vaccine was conjugated and we don’t have the technical knowledge or equipment to do such sophisticated bio-engineering. In any case, if indeed we had deliberately contaminated the vaccine, it would have shown on the HPLC tests performed by Dr. Muthuri, and knowing his level of integrity, he would have exposed us as fraudsters and happily handed us over to the police!”

In January 2017, in response to the report written by Business Daily, Kenya Accreditation Service(KENAS), the organization mandated to offer accreditation services by the Government of Kenya, released the following document confirming Agriq-Quest’s suspension.

Interestingly, in 2016, Dr. Stephen Kimotho Karanja and Dr. Wahome Ngare from the Catholic Doctors Association, in Nairobi, Kenya, were summoned to appear before the Preliminary Inquiry Committee of the Kenya Medical Practitioners and Dentist Board to answer to a series of complaints received from the Kenyan Medical Association and the general public.
Dr. Stephen Kimotho Karanja and Dr. Wahome Ngare, who were both well respected in their fields, were accused of misleading the general public regarding tetanus and polio vaccination programs and in doing so were said to have stepped outside their fields of specialization.
As the Medical Practitioners and Dentists Board is an organization that determines licensure and maintenance of an annual register of duly qualified doctors and dentists, these two well-respected doctors faced being struck off the medical register for exposing the truth about the vaccines.
We asked Dr. Ngare what happened at the hearing, he stated:

“In brief, they brought in a vaccine expert who gave us a long lecture on the importance of vaccines and the long process and quality checks any vaccine goes through before it is approved for use in human beings.
We were then invited to present our scientific findings, which shocked the board. The board chairman acknowledged that the matter was serious and promised to call representatives from the ministry and arbitrate between us and them so that we can come up with the best possible way to deal with this threat going forward. He asked for our undertaking that we will not discuss the matter in public again until it was resolved internally.
Since the proceedings of this committee are equivalent to a court of law, we were supposed to get signed copies of the ruling so that we could move to the next step. To date, all our lawyers’ efforts to get the signed proceedings and ruling have been futile!
My feeling is that the sermons were used to create a certain impression among the public – that we were summoned by the board for disciplinary proceedings and we have never spoken thereafter!
A very clever political trick, I must admit. Dr. Karanja and I continue to work, just as does Dr. Muthuri, but the impressions created are very misleading.”

If what Dr. Ngare is saying is true, then we need to question whether or not the above hearing was more about silencing these professionals to further their agenda than exposing the truth.
We asked Dr. Ngare whether or not he believed that this was the reason that Agriq Quest had their license suspended. He explained that:

“The body that supposedly ‘deregistered’ Agriq-Quest is a local accrediting organization and most likely has affiliations to international organizations, which would explain its actions. It is not the registering body for laboratories in Kenya and therefore cannot deregister the lab! It had accredited only some minor functions of Agriq-Quest that did not include the test we did.
They only withdrew their local accreditation, which is of little consequence to the functionality of the laboratory. It was most likely a preemptive move to put doubt in the results just in case the results are ever published in a scientific paper as we have done.”

Were Agriq-Quest Equipped to Test Vaccines?

From Agriq-Quest’s Facebook page, it certainly appears that the laboratory was equipped to test the vaccines for hormones, leaving us to question why their former employee brought their capabilities into question?
Agriq-Quest states:

“AgriQ-Quest, a joint venture between Quest Laboratories Ltd in Nairobi Kenya and AgriQ in the Netherlands, offer a wide range of Laboratory Analytical Services for small, medium and large agricultural, manufacturing and service organizations.”

To discover whether or not the laboratory was equipped to do the testing or not, we contacted Agriq-Quest Ltd and asked them if there was anyone available to answer a few questions.
A spokesperson for the company who wished to remain anonymous for legal reasons, agreed to be interviewed.
We asked him what the laboratory had been asked to test and why. He replied:

To demonstrate to readers exactly what tests Agriq-Quest Ltd were asked to perform, Health Impact News was given permission to publish the following letter. 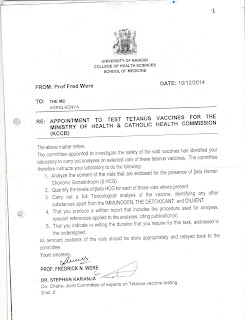 We asked the spokesperson whether or not the laboratories were equipped to test the vaccinations for contamination. He stated that:

“Yes, the method of choice was HPLC. We have 3 HPLC machines and we developed and validated the method. We also carried out checks with the urine of a pregnant mother and a non-pregnant mother to confirm that the method we selected was able to detect the presence of beta hCG. We found that the method detected beta hCG even if it was present in very small quantities.”

We asked him whether or not the laboratories had found the vaccinations to be contaminated and if so, with which substances. He replied that:

We asked him who they had reported their findings to. He replied:

“We reported our preliminary findings to the joint committee. The committee was disbanded before the final report was presented.”

We asked him who suspended the company’s license and why. He explained that:

“Our license was not suspended. We continue to run the laboratory. What happened is that we had an accreditation from KENAS, a government institution for analysis of some parameters in soil and wastewater. They suspended the accreditation which we know was due to some other influence and we decided we did not require it anymore so we withdrew from it.”

Finally, we asked him how the staff at Agriq-Quest felt about what had happened. He told us that:

“We feel we were right in our analysis and that the vaccines were contaminated with beta hCG. No kind of intimidation will hide this and take this scientific fact away. What happened was a systematic scheme to destroy the credibility of the laboratory and cast doubt on the tests since they did not have the capacity to challenge the science and method that was used to analyze the vaccines.”

Health Impact News would like to thank both Dr. Ngare and Agriq-Quest Ltd for their frank and honest contributions to this article and we wish them every success for the future.
This article written by Christina England first appeared first on Health Impact News on February 13, 2018.
Published by Pablo Heraklio en 10:40