The assimilative capacity of capitalism is unrivaled.

Thousands of Mexican vigilantes are ready to become part of a new Rural Police force. The Government expects bring 20,000 members of self-defense groups under its control before transform in an army  EZLN or FARC-style. RT 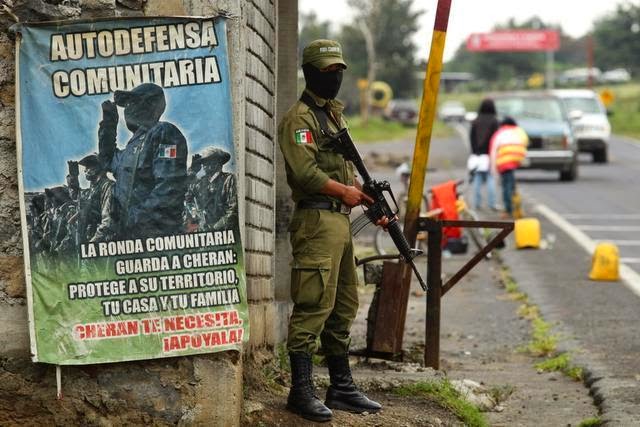 Mexico is a vital country for illegal trade in all America, and an springboard to Africa and Europe for distribution. Land route and must funnel for cocaine and marijuana into the United States. Source of cheap labor and maquila fields. As good corporations, the territory was divided into clans that maintain a visible legal part, public officers, politicians and bushinessman, and otherwise illegal businesses. Gives them benefits that employees in electoral campaigns and many businesses. Military, Police, Media, Government and Judges complicit is absolutely necessary for black market to flow drugs at a good price and continue the orgy of money.

From 2006 with Vicente Fox PM, USA steps up its War on Drugs in Mexico, which serves as excuse to militarize the country, applying his beloved martial law, fill the pits and definitely lower production costs, to delocalizate American industries, and transport their goods.

After years of abuse the people slowly manages to organize their self-defense groups, Autodefensas: peasants, armed neighbors who patrol their counties in far west style. What started out as popular initiative leads to a paramilitary organization, with all that that implies. In Michoacan self-defenses act as mercenary armies offering effective protection to mining companies for example.

Now in 2014 the regional government of the Mexican State of Michoacán establishes a plan of assimilation, driven by DEA, sponsored by Peña Prieto narco presidente, and perpetrated by their own leader. After the talks this Saturday Watchers of self-defense began handing out blue uniforms and Americans assault rifles. From vigilants to agents. Around 3,300 over an estimated 20,000 watchers, swore office as narcopolice. They state will stop anyone carrying weapons from now.

The betrayal of the leaders
The Council of Self-Defense Forces dismissed a founder and spokesman of the movement, Jose Mireles, on Thursday after he was involved in the killing of five civilians. 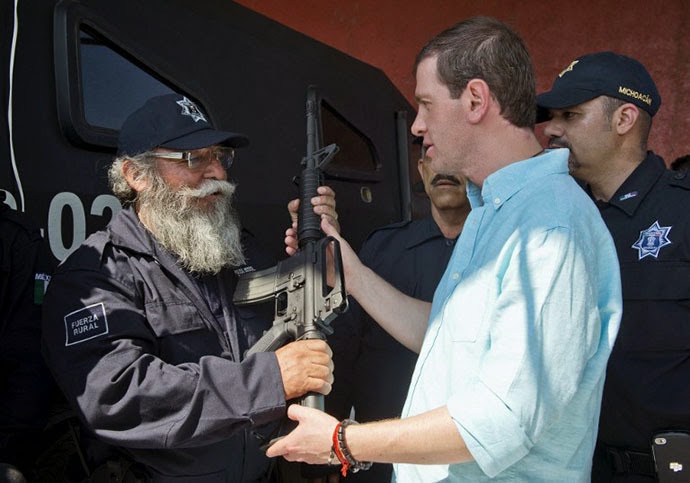 Another founder of groups, Hipolito Mora, was arrested in connection with the murder of two other vigilantes. Mora admitted on local radio that the vigilante organization had been infiltrated by organized crime.

After the brief purge, proclaimed leader of the watchers Estanislao Beltran, nicknamed "Papa Smurf," ​​said his fight against (rival) cartels had just begun. "With this change we are already part of the government."

Populism: the mistake strategic that cost them the fight
The self-defense, ordinary people, villagers, terrified at the escalation of violence and tired of the siege, are more concerned about protecting the territory of the mafias tham fight the cause of the situation. This "neutral" Fight of interest for all, with an apparent lack of ideology and philosophy, populism, has been a critical strategic error, allowed mafia to infiltrated, bribed and manipulated them. First sign could be seen at the moment  self-defence groups professionalized as paramilitary groups. Them starts with a mercenary behaviour. The lace is put their own leader Estanislao Beltran accepting Government manipulation. The 360º turn is already done, as police and army have been natural extension of the mafias, causing the state of calamity in which people find themselves, and also the cause of creation self-defece groups. Now the people is with the same army and police but without self-defense groups!

The underlying problem was never violence or trafficking or corruption. They are terrible, but they are effects, are collateral, incidental, not the cause. The cause is the system and its values, the way and the why of doing things, and the philosophy and ideology that sustain it: money above human beings. This is the not reached conclusion and therefore problem that can not be remedied, preferring to use the methods of the enemy, the Masters, tham the brain. In their imaginary someday will become rich and enjoy the luxuries shown on TV. In reality remain ditch meat or maquila fooder.

The Autodefeensas are being assimilated, slowly succumbing to the temptation of a cancerous life within the system, either in government, and rampant corruption in certain areas of the territory. Police/mafia regain control over lost territories, restore black market trade routes and reintroduce the genocidal system against which they fought so long and so much blood and suffering cost.

The assimilative capacity of capitalism is unrivaled. It's called money.


If you do not live as think, you think as you live.
For Autgestión and For real Self Defense!