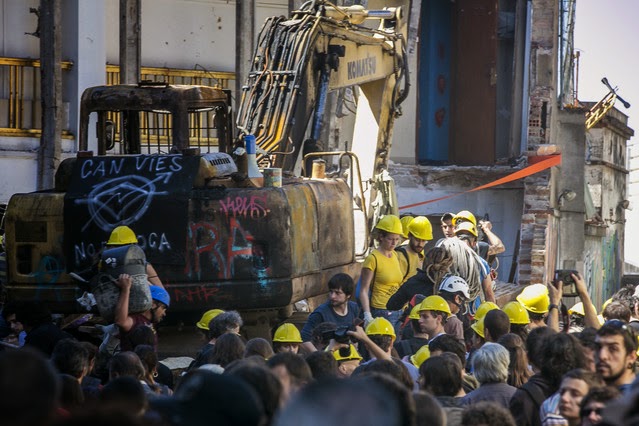 elperiodico.com 31/5/2014
People form a human chain to carry the debris to the evicted headquarters of the Sants district

________________
Barcelona: The eviction of the historical Self-Menaged Social Centre "Can Vies" on May 26 unleash a wave of demostrations. On 28th night 7.000 people in Sants Square. More tham 60 across the country.
Riots brings 30 detentions at the moment. A bulldozer, a ban of Catalonian 3TV, a ban of Barcelona Underground Service burnt as an undeterminated ammount of containers an banks. Catalonian Police Director has resign after the last policial interventions.
Conscient of people aweak , fighting neighborhood.
________________
Joint the call: Can Vies supporting Concentrations have been repeated for third day. This time, the protests have spread throughout the spanish State territory.
lahaine.org 29/05/2014
An estimated of 60 demonstrations in different locations in the Catalan Countries. Despite the rain, at 7pm have begun the first concentrations in Cornella, Badalona or Gamonal distric (Burgos).
About 8pm have joined the demonstrations in Igualada (100 people) , Berga (50), Terrassa (100), Caldes de Montbui, Vilanova and Geltrú, Vilamoura, El Vendrell (80), Barbera del Valles (60), Esparreguera, Montcada i Reixac (60), Granollers (60) , Manresa (150) , Mataró (70), Ruby, Olot (20), Mollet, Sant Cugat del Vallès and Sant Quirze, Olesa, Valls, el Garriga, Cardedeu (30), Sant Feliu de Llobregat (50) or Tortosa.

________________
Can Vies: The reason for the police force in Barcelona.
La voz como arma 29.52014
These days, as reflected in this blog ("Unknow set fire to the excavator that was used to demolish the CSO building Can Vies, evicted yesterday" and "the CSO Can Vies evicted in Barcelona"), the Sants distric, and by domino effect much of the Barcelona city and other Catalonian towns, lives moments of revolt and solidarity after the eviction on Monday 26 of the squatter social center Can Vies. Historical reference for the antagonist social movement in the Catalan city, with 17 years of experience, fight , free and rebel culture, which has lead to build strong ties to the neighborhood, creating a solidarity network that has paid off in the different demonstrations these days. Thousands of people of all ages had shouted against speculation and lack of spaces from which to rethink and transform the existing relations in an anti-capitalist and self-managed way. While, other fewer, less patients, more passionated and thirsting for strike back and return to sender a little of the anger that the dogs of the system spread every day, had smashed banks and attacked police and mass media journalists, made barricades blocking train traffic. People had set fire to the demolition machinery parked in the area of ​​the squatter.

A worthy vengeance that has not stop yet, and continuing today with new demonstrations, and will follow which many qualify as "Can Vies Effect " which comes from social networks as "the new Gamonal", referring to another recent example of massive neighborhood mobilization in this Burgos city distric, where the neighborhood  solidarity brings to a permanent cessation of the works for a new, useless and expensive boulevard. Calmed conflict but no the consciences of the residents.

The totalitarianism of "their cities" do not fit with who have inhabited or known gaps of mercantilism, full of life and passion, dreams and hopes. Where neither boredom nor the monotony of status-quo have no place, venturing into new ways of politics but above all, to interact and disobey.

To the Masters: your cities are sad. You want places without participation, where everything is automated and ready to keep us allienated from our needs and the resources we need to truly satisfy, dedicated to the hypnotic and absurd work to keep us turning in gears that make screens, fences and new desires to use and pull, synthetic experiences, electric household comfort and unattainable ideals of life while pursuing gradually lose breath and self-esteem. To finish in the peat fades faceless crowds walking downcast sorrounds by windows lined streets, cameras and publicity. An sterile stage of peace, security and harmony that breaks so easely as shops and banks windows whenever the system programming failure, and the mass ceases to be to become free people who pool their efforts and organize autonomously to end the social zoo and clash the miserable living conditions it imposes.

Now, the comrades of the anti-development and libertarian magazine Argelaga publish in his blog a text about Can Vies, his role in Barcelona turned into tourist brand, the eviction and the answers give in the street. After receiving the email, I leave it for reading, reflection and debate. For other texts, information and news publication, visit the blog of Argelaga here.
________________
Can Vies: The Reason for the police force in Barcelona.
Argelaga, May 28, 2014
When the force of reason is subbmided by reason of strength, not everyone can talk about Law or Rights. In this situation the law is arbitrary and its implementation does not follow the "rule of law", but a state of abuse where violence is monopolized by the government to serve privileged interests. In this case the abuse resistance is legitimate. Moreover, the right to resist and defend themselves is really the only Right. Therefore, from the point of view of freedom, dignity and reason, the true sources of law, the protest against the demolition of squatted and self-managed space Can Vies, in Sants district, can not be more justified. Its demolition was not a pretext for "intolerable itinerant minorities violence" take advantage of the unrest "as the authorities, and the policial trade union UGT, say: it has been simply a sign of institutional barbarism, blind, wild ans widespread represive violence.

The metropolis called Barcelona is not a comprehensive settlement organized by a community of people as when it was founded; nor is a industrial city full of blue collar workers as it was before; the overcrowding Barcelona is only an open and peaceful consumer space, where every human movement must be regulated and controlled to ensure transparency and function. Who rules in Barcelona are not neighbors, but a political and financial caste, verticalist and authoritarist. An usurping parasitic caste, making the urban management their privileged way of life. What counts for leaders is the "Barcelona brand". To give a neat and calm image, such as a mall or a theme park, good for business, shopping, leisure commodified and tourism. It is evident that the spectacle of a consumable Barcelona needs a space without contradictions and ambiguities, completely subdued and set for the buyer.

The new urban model not allow the existence of truly public spaces, without mediation or barriers. And forget the horizontal management: everything must function as a hierarchical and monitored scenario where technology, ordinances, street furniture and urban development are at the service of plunderers leaders. The exercise of authority under these conditions is essentially police; at this stage, is confused with political repression: management, monitoring and order are the same thing, so the Government rules everything, from public order to council. The policy is then not a matter of policy, but the relentless security forces. All political and social problems that this aberrant model city constantly causes will never be recognized as such, since the population has no right to complain about "the best of all worlds". The only response from the dominant power, hijacked of popular choice, is violence.

It is clear that on the issue of Can Vies, city officials never intended to offer alternatives aside of official bureaucratic circuit. Every meeting was poured to manipulation and deceit, because proposing such unacceptable controlled space in which they really wanted to remove as place for people. The disproportionate police presence to enforce the eviction proves it.

Master had neither think about the intervention of other groups or the neighborhoods to support the Center. Nor solidarity from other districs would expect, as happened in the early morning. So that the "unjust order" forces were initially surprised. Where was the ultrasonic cannon and why not shoot immediately "foam" bullots? The police trade union SMT-CCOO wondered that, as must to be said that repression is a mercenary work whose employees are covered by the state agreements. The answer everyone has seen. Almost military occupation of the distric, indiscriminate police violence, arbitrary arrests and injuries ...

All the mediatic efforts of Barcelona Mayor Trias, public order Councilor  Espadaler and Councilman Sants-Montjuïc district Jordi Martí, was directed, first, to support any violent policial action. Police, the "defender of property rights" and "executing an order of Supreme Court". In fact, they have not explained too much: "Bad thing is that  if the police has to justified their facts" Espadaler, " security forces have reason. When mossos act is becouse a reason" Trias. them, the politician efforts was also directed to present the protests as the work of infiltrating violent groups, with the idea of ​​splitting between peaceful protest and radical, "anti", in order to "find ways of consensus" with some and beating and jailing others. It's an old political tactic that comes up when the violent force has not given all the desired result. The leader demagoguery suck but that is. We do not blame the authorities for lack of subtlety when the only need is the lack of scruples!

Can Vies was a stone in the shoe of power in Barcelona. And it seems that this has not been easily removed. Resistance has been exemplary in many ways, proves that there are people that do not fit the slave behavior they impose. This is cause for joy. Today there are plenty of concentrations. Trust in the near future to have many others!
The struggle continues. Visca Can Vies! 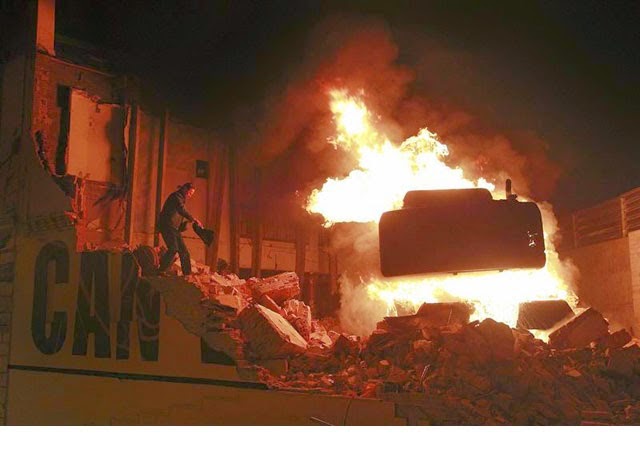 Night moved in Sants district due to incidents occurred after a new demonstration of about 500 people against eviction and demolition of the squatted center Can Vies beginning, being called late in the afternoon. The incidents were spread overnight to other distrits in the city and have resulted in six detainees. (SEE PHOTO GALLERY )

About 500 people gathered in the evening on the streets of Sants to protest the eviction, with the participation of dozens of neighbors, clapping from the the balconies, shouting " You touch Can Vies touch us all " and " combative Barrio" .
On Monday , following another demonstration , there was burning container and furniture as well as a mobile unit TV3. Tthe police identified a dozen people and arrested two . One will go to court on Wednesday and another was released with charges .
________________
F.N.J.A - Disturbios en Barcelona por el desalojo del centro social Can Vies 27.5.2014

The social center Can Vies Barcelona, evicted Monday by police after 17 years of operation, has begun to be shot down minutes after the end of the police operation, in which twelve young people have been forcibly removed from inside the house, where six of them had barricaded or chainning. Police have concluded the eviction of self-managed social center can Vies, in Sants district, at 19:00 hours on Monday 26, after getting expelled from the dwelling at 12 youth. At least one of the young, who have been taken by officers, had barricaded himself behind a concrete wall built, protected by gas bottles, and has broadcast a video of the themselves.

Pass the eviction , there have been clashes between officers and youth groups, after finishing the demonstration in Sants district, to protest against the police operation. Two youngs have been arrested during the riots.
Published by Pablo Heraklio en 14:08