George Floyd Solidarity In The Bay Area: Representation And Power

Source- George Floyd Solidarity in the Bay Area: Representation and Power - It's Going Down 29.5.2020 Anonymous

A Critique Of Weaponized Identity Politics Used To Silence Rebels And Gain Political Capital. Written By Anarchist People Of Color And Originally Published To Indybay.


“We must never forget that the insurrectionary project belongs to the masses alone; organizers help it – leaders betray it.” – Raoul Vaneigem 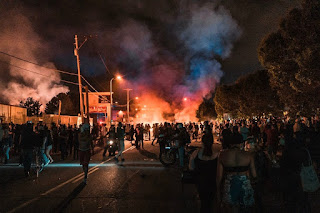 This is an open letter to provoke an alternative political position to the weaponized authoritarian use of identity politics. Self-pronounced leaders in the Bay Area have tried to insinuate that anyone who desires conflict with the police after the murder of George Floyd in Minneapolis are “White people [who] DON’T get to use Black pain to justify living out riot fantasies.” As if the real white fantasy isn’t people of color policing their own behavior in order to save the white supremacist society from being destroyed. This is an old trick that is worth being exposed, again.

Power operates through representation. In court it’s “the people” vs. the defendant, the state purports to represent all people against the criminal activity of an individual. In movements it’s the leaders who pretend to represent us when saying it’s not time or it’s not safe for us to revolt, usually hiding behind the vulnerability and power of the uncontrollable youth of color. They mediate our rage in order to gain a seat at the table of power. They are aspiring politicians. This type of power, similar to state power, operates on false binaries. George W. Bush told us “you’re either with us, or with the terrorists” and the movement leaders tell us “you’re either peaceful or you’re a provocateur”, or in this case they weaponize identity politics for obedience to their ideology: “you do what we say or you’re white.” They erase the rage of people of color because they cannot gain power from us. Since it is impossible to choose between such ridiculous choices “we are led into the realm of tolerance and relativity that is so dear to the bourgeoisie” ( Vaneigm, 1967). We are forced to choose a side where in the end, hierarchical power remains intact, and thus the ruling order only changes in branding.

Solidarity demonstration with the uprising in #Minneapolis against the police murder of #GeorgeFloyd. This Friday 5/29 8pm Downtown Oakland Oscar Grant (14th & Broadway). https://www.indybay.org/newsitems/2020/05/28/18833331.php …

148 people are talking about this


As insurrectionary anarchists of color it’s important to demystify a few facts:
when the youth of color decided to take the 580 freeway on 5/28/20 it wasn’t movement leaders they called for support- it was us, because we love their rage and want nothing but for them to be successful and safe. After all it’s because of our failures that they live in a world where police continue to murder with impunity, yet movement leaders are constantly drowning out their grief, rage, and agency with calls to give peace a chance, all in the name of same youth they are repressing. Representation is impossible with an uncontrollable force, because it is not legible or respectable, it can’t get you votes or make you look good on the internet. In this particular case the “leaders” are visibly out of touch with what is actually happening in the street.


Our political desire is not to consolidate power through identity politics. The nationalist failures at decolonization revealed that the colonial structures of the State and racial identity as a whole must be abolished in order to gain our freedom. Categories are only useful in analytically understanding power, but I am not only my oppression. It is not an essential characteristic of my being; my love for my comrades is, my desire for total freedom is, the joy I receive in rebellion during upheaval is.

Until all the prison doors are open, and the border comes crashing down, we’ll see you on the barricades.
Published by Pablo Heraklio en 11:58