Thirty Seconds to Midnight: the Doomsday Clock moves forward. The End of the world will come by miscalculation or simply Insanity 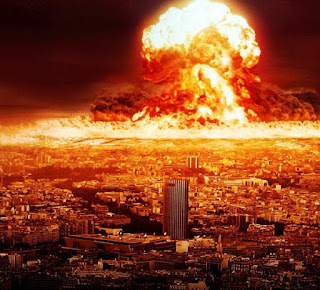 The Western pubic doesn’t know it, but Washington and its European vassals are convincing Russia that they are preparing to attack. Eric Zuesse reports on a German newspaper leak of a Bundeswehr decision to declare Russia to be an enemy nation of Germany.

This is the interpretation that some Russian politicians themselves have put on the NATO military bases that Washington is establishing on Russia’s borders.

Washington might intend the military buildup as pressure on President Putin to reduce Russian opposition to Washington’s unilateralism. However, it reminds some outspoken Russians such as Vladimir Zhirinovsky of Hitler’s troops on Russia’s border in 1941.

Zhirinovsky is the founder and leader of Russia’s Liberal Democratic Party and a vice chairman of the Russian parliament.

In a confrontation with the editor of a German newspaper, Zhirinovsky tells him that German troops again on Russia’s border will provoke a preventive strike after which nothing will remain of German and NATO troops.

Russian Foreign Minister Sergey Lavrov has expressed his frustration with Washington’s reliance on force and coercion instead of diplomacy.

It is reckless for Washington to convince Russia that diplomacy is a dead end without promise. When the Russians reach that conclusion, force will confront force.

Indeed Zhirinovsky has already reached that point and perhaps Vladimir Putin also. As I reported, Putin recently dressed down Western presstitutes for their role in fomenting nuclear war. See also:

Putin has made it clear that Russia will not accept US missile bases in Poland and Romania. He has informed Washington and the imbecilic Polish and Romanian governments.

However, as Putin observed, “they don’t hear.”

The inability to hear means that Washington’s arrogance has made Washington too stupid to take seriously Putin’s warning. If Washington persists, it will provoke the preventive strike that Zhirinovsky told the German editor the Merkel regime was inviting.

Americans need to wake up to the dangerous situation that Washington has created, but I doubt they will. Most wars happen without the public’s knowledge until they happen.

There is no sign that Congress is aware of approaching Armageddon, and the media consists of propaganda.

I and a few others try to alert people to the real threats that they face, but our voices are not loud enough. Not even Vladimir Putin’s voice is loud enough. It looks like the West won’t hear until “there remains nothing at all of the German and NATO troops,” and of Poland and Romania and the rest of us.

Former US Secretary of Defense William Perry warns that the world is on the knife edge of nuclear catastrophe. Such catastrophe can result accidentally from electronic failures or glitches in warning systems and from the recklessly aggressive and unnecessary force buildup against Russia.

Conn Hallinan discusses these issues. I doubt Hallinan is correct about Washington’s military predominance. This is Washington’s view, and this view makes Washington confident that it holds the aces. It is a mistake for Hallinan to encourage Washington in this view.

Nevertheless, Hallinan makes it clear that we could all be vaporized at any minute. This extremely high risk has been created entirely by the Clinton, George W. Bush, and Obama regimes in which Zionist neoconservatives have controlled foreign and military policies.

It is tiresome to hear the argument that nuclear war won’t happen because it makes no sense.

William Perry points out that the failure of a 49-cent computer chip resulted in NORAD’s computers signaling that the Soviets had launched 220 nuclear missiles at the United States.

Consider that 50 percent of Americans’ choices of marriage partner are miscalculations as established by the divorce rate.

The mere existence of nuclear weapons means the nonexistence of life on earth. It will happen sooner or later. To raise the risk as the crazed American government is doing with irresponsible provocations of the Russians and Chinese is the ultimate criminal act.

There is no greater threat to human rights than to endanger all life, and that is what Washington and its two-bit punk NATO vassals are doing by increasing tensions between nuclear powers.

The neoconservatives in Washington have replaced nuclear disarmament with a new nuclear arms race. All of the hard work and accomplishments of previous US administrations to ease tensions and to reduce the stockpiles of nuclear weapons has been thrown away by the psychopaths who control the government in Washington.

The Atlantic Council: The Marketing Arm of the Military/Security Complex

How much did the military-security complex pay the Atlantic Council to publish this sales pitch to Poland to load up on US weapons systems?

The sales pitch was written by arms salesmen Richard Shirreff, a partner at Strategia Worldwide Ltd., and Maciej Olex-Szczytowski, a “business adviser specializing in defense.”

The sales pitch is titled “Arming For Deterrence.” The Kremlin is unpredictable, say the arms salesmen, and could at any moment decide to attack Poland. However the Russian regime “respects a show of force” and would back down if Poland has a sufficient inventory of US weapons.

The sales pitch encourages Poland to take many aggressive and dangerous steps toward Russia, such as targeting Russia cities and facilities including RT. But before provoking the Bear like this, Poland needs “to join the tactical nuclear capability scheme within NATO, so enabling its F-16s to be carriers of tactical nuclear ordnance.”

Poland also needs to be able to strike deep inside Russia and for this needs to purchase American long-range JASSM air-launched cruise missiles, the Navy Strike missile coastal missiles, and the Guided Multiple Launch Rocket Systems.

The bill for this deterrence against non-existent “Russian aggression” comes to
“some US $26 billion” on top of planned expenditures of US $34 billion. “Poland should move forward expeditiously with procurements,” say the arms salesmen or risk being attacked by superior Russian forces.

The numerous military/foreign policy think tanks funded by the military/security complex provide the propaganda and made-up threat. This is a dangerous game, because the Russians see a real threat in the hostility that is directed at them.

The anti-Russian propaganda is universal and includes the Olympic Games. Washington wants Russia excluded based on the allegation that only Russians take performance-enhancing substances.

What extraordinary nonsense. I have a relative who travels widely to test athletes of every sport, even golf, for the use of performance-enhancing substances.

It is not the Russians who have corrupted “clean sports.”

It is the money that the corrupt Americans have poured into sports. To be a champion, to win the Masters at Augusta National, to win a gold medal means to be a multi-millionaire.

Sports that people once played for enjoyment are now a lucrative profession.

Money corrupts everything, and it is capitalism that turns everything into a commodity that is bought and sold. In capitalist regimes everything is for sale: honor, integrity, justice, truth.

Everything is reduced to the filthy lucre.
Published by Pablo Heraklio en 10:19